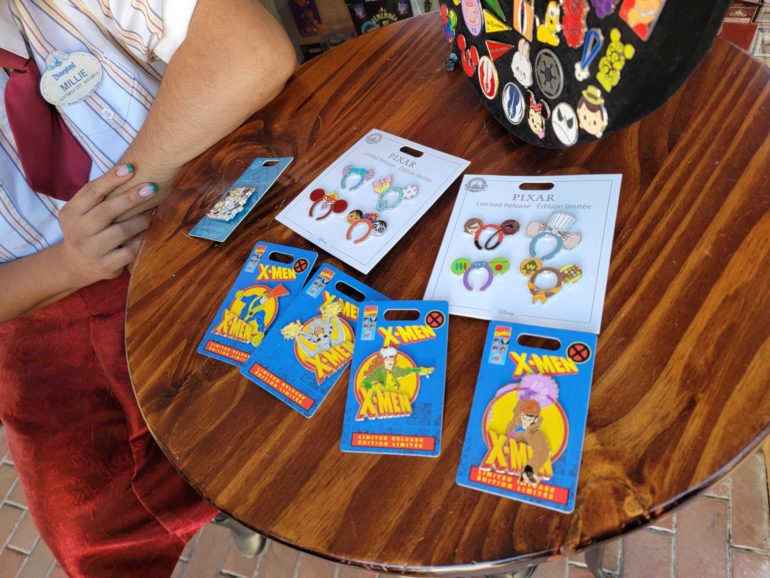 At the 20th Century Music Company on Main Street U.S.A. at Disneyland we found a series of limited release pins and pin sets featuring characters from the X-Men and Pixar, as well one with Mickey and Minnie Mouse.

Recently seen at the 2022 D23 Expo, the 20th Century Music Company had four of the five X-Men – Cyclops, Storm, Gambit, and Rouge, Limited Release pins available for sale. In addition to being for sale at Disneyland, these pins can also be purchased at shopDisney.com.

A Marvel mutant favorite, the limited release Cyclops pin, inspired by Marvel’s 1990s “X-Men: The Animated Series,” is made from an enameled cloisonné and a nickel finish. The pin features Cyclops, seen from the waist up, emitting beams of energy or “optic blasts” from his eyes. He is framed by a large yellow circle with a red border. Running across the bottom of the pin is a 3-D “X-Men” logo also in yellow and red. The pin measures 2 1/2” H & 2” W.

With the ability to control the weather and atmosphere, Storm is considered one of the most powerful mutants on the planet. With upraised arms and an energy force – in yellow around her hands, summoning the rain, her pin, measuring 2” H & W, is also made from an enameled cloisonné with a nickel finish. She is on large yellow circle with a red border with the 3-D “X-Men” logo in yellow and red on the bottom of the pin. It also features a black pin back and has a Disney Pin Trading 2022 backstamp.

This pin shows Gambit, dressed in a brown jacket, ready to throw playing cards, in varying shades of purple, he transformed into explosive projectiles. He is on similar background of yellow and red with some purple energy matters dripping down one side. The 3-D yellow and red X-Man logo is partially obscured by his left arm extending outward. His pin is also made from the same materials as the others and measures 2” H & W.

With the ability to absorb and sometimes remove the memories, physical strength, and superpowers of anyone she touches, Rogue considers her powers to be a curse. However, you will only be empowered wearing her pin. With a streak of white running through her cascading red hair, Storm sports green jacket and yellow gloves matching her suit. Her right hand rests on the “X-Men” logo while her left hand extends out beyond the red and yellow circular background. Made from the same materials as Storm, Cyclops, and Gambit, the Rogue pin measures 2” H x 2 1/4” W.

The first of the two Pixar Limited Release set of four ear headband pins features imagery representing Top left to right: Helen “Elastigirl” Parr (“The Incredibles”), and Remy (“Ratatouille”). Bottom left to right: Buzz Lightyear (“Toy Story”), and Russell (“Up”). Each of these colorful pins is metal with a black pin backing.

This Mickey and Minnie Mouse pin is from the Fine & Dandy Collection. Dressed in 1930s clothing for Dapper Day, set against a background of pink and white stripes, Mickey is dressed in a yellow hat with a blue and white band. He sports a brown suit, spats and a black cane. Minnie, with a pink and blue chapeau adorned with a white bird, is in a black dress with a turquoise ribbon sash around her waist. In her hand is a matching turquoise parasol. Written between them is “Fine & Dandy 2022.”

Will you be adding these to your collection or hoping to trade them with someone else? Let us know in the comments below.

Check out these other limited edition pins currently available at the Disneyland Resort: