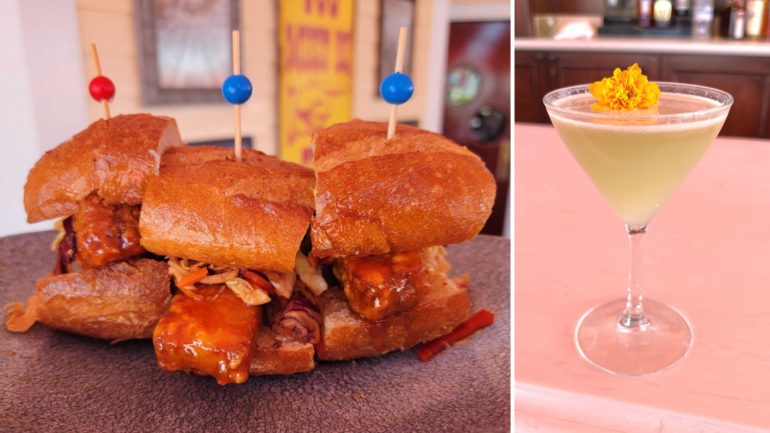 Lamplight Lounge – Boardwalk Dining in Disney California Adventure has some new and returning items in honor of the fall season.

The Chile-Ginger Pork Belly Sliders (also known as “Piggy Sliders”) are new, while 2019’s Ghost Pepper Nachos are back. A drink called “One Last Bite” is available here and at the regular Lamplight Lounge.

These are a rare miss for Lamplight Lounge. Well, maybe not a total miss, just less than we were expecting. It seems that this is one of those dishes that fell victim to the “too many things” problem that happens frequently across Disneyland Resort.

It’s a domino effect where nothing quite hit the mark all the way. It seems like something that could be easily improved with a couple of tweaks to ingredients or preparation but as it stands, it was a little underwhelming in flavor.

For the price, we were hoping for something a little more impressive. There are other things on the menu at Lamplight Lounge – Boardwalk Dining that are far more impressive and satisfying than this.

Where the pork belly sliders were rather flavorless and boring, this is surprising and complex. The cucumber simple syrup comes through much more than we would have expected and we enjoyed it a lot more than we thought we would. It’s not overpowering, but it definitely makes its presence known.

The tequila can be tasted throughout, which is a good thing because if you’re drinking a quality spirit, you want to taste it a little bit. There’s no acrid bite, no burn at the back of the throat, but you want to know what you’re drinking rather than just losing all alcohol notes completely.

The tamarind is the only thing that didn’t come through heavily, but it was there, adding a roundness of flavor and a sweetness that we would have missed had it been omitted. The tartness of the lime juice helped to cut through the sweet notes and balance everything out for a varied flavor profile that came together perfectly. And in a sea of pumpkin spice everything, it’s nice to have something that still feels like a late summer drink to enjoy, for instance, on an upper-level deck of a pier, overlooking the sunny bay. Overall, we thoroughly enjoyed this cocktail.

These nachos are extremely spicy. The green light chips were good with the spicy ghost pepper cheese sauce. The chicken, however, was a bit dry, but it also had a spicy kick to it. The beans and salsa verde were a nice addition as well. If you can handle the intense kick of the ghost pepper, you’ll love these nachos, especially if you’re into the spiciness of the ghost pepper.