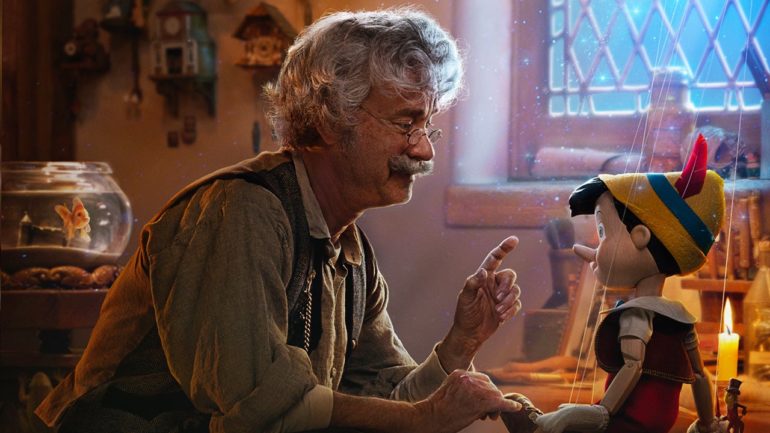 I remember the day when I first saw Pinocchio as a kid. During the summer, my local theater would show a double feature of a classic Disney animated film and a live action film. One particular Wednesday, the Disney double feature was Pinocchio and The Apple Dumpling Gang. I had never seen either and was looking forward to both of them, especially Pinocchio, but while watching the movie as a five-year-old boy, I was horrified (and couldn’t wait for Don Knotts to show up in the next movie).

The stuff that went on in the original “Pinocchio” was a nightmare to me. Stromboli locks Pinocchio in a cage and tells him that eventually, when he has no more use for him, he is going to chop him up and use him for firewood! We also saw the bodies of ex-puppets chopped up and lying in a pile!

Pinocchio goes to Pleasure Island with a bunch of juvenile delinquents, where they smoke cigars, drink beer, and act like a bunch of jerks. Then after their hangover, they are turned into donkeys, have their clothes ripped off of them, and then are shipped off to who knows where to work as donkeys! Forever!

Then Pinocchio and his father are stuck in the belly of a whale starving to death and waiting to be digested. They finally escape and are pursued by this nightmare of a whale in a horrifying chase scene. It’s finally over, and it looks like we will be getting a happy ending, but no, Pinocchio is found lying face down as dead as can be. Queue the morbid trumpets to add to the horror. The Blue Fairy shows up at the end and brings him back from the dead, and he is now a real boy, and everyone is happy. But that happy ending did not erase the image of seeing a floating and dead Pinocchio, and also knowing that no one went back to rescue those boys who will forever remain donkeys.

With Disney putting out live action remakes of their classic animated movies every year or so, I figured it was only a matter of time before they got to “Pinocchio.” And, of course, I was curious how the horror that I experienced as a child was going to play out. I do want to make it clear that although the original movie scared the crap out of me as a kid, I still love it and think it’s one of the best movies that Disney has ever made.

So how is this live action version of “Pinocchio?” It’s a bit of a mixed bag with some good stuff and some bad stuff, but nowhere near as good as the original. For the most part, the movie remains faithful to the original Disney version. There are some changes made to the story, which were less effective than the original. As far as scares go, the Stromboli part is toned down a lot. The Pleasure Island scenes are also less frightening. The kids are still turned into donkeys, but it’s nowhere near as bad as the original, where that one kid wants his mama. And Pinocchio’s death? If you are interested in that, I’ll discuss that in The Spoilers.

I’ll start off with the good stuff first. Pinocchio looks pretty much exactly like the character that we have grown to know and love. It seems like nowadays, everyone has the rights to make their own version of Pinocchio, but it’s the Disney version that most people are familiar with and relate to. That’s what they want to see, and that’s what they get in this movie.

Benjamin Evan Ainsworth provides the voice of Pinocchio, and it’s pretty spot on. The character of Pinocchio is the best part of the movie, and if they would have messed that up, it would have been a complete disaster. Cynthia Erivo does a great job as The Blue Fairy, and I like how they changed her introduction and interaction when she first encounters Pinocchio. It’s different from the original, but it works. Erivo also has a beautiful singing voice for “When You Wish Upon A Star.”

Keegan-Michael Key voices the character of Honest John, and you can tell that he must have seen the original many times and has a lot of fondness and respect for the character. I was really happy to see that they got the characters of Honest John and Gideon right, and a lot had to do with Key’s performance. I thought Pleasure Island looked incredible. They went completely overboard with the look of the carnival and definitely made it look like a place kids would be tempted to go to. The sets look great, and they represent a more colorful version of an Italian village that brings about a modest fairy tale look.

Alan Silvestri composed the music for the film, and he does a really good job bringing back old themes and creating new themes for the score. Silvestri is known for composing “Forrest Gump,” “The Polar Express,” and “Back To The Future.”

Now for the bad. Like most remakes, it raises the question, “Did we really need this?” It is for fans that might appreciate a slightly different retelling of the story, but for most people, it may feel like they wasted two hours of their life.

Joseph Gordon-Levitt voices Jiminy Cricket, and I thought he was the worst part of the movie. I like Gordon-Levitt in some things, but don’t know how he got the role. It feels like he is phoning it in and just doing a poor imitation of Cliff Edwards, who voiced the original Jiminy. Also, the design of Jiminy looks very cheap.

Sofia is a new character, a talking seagull voiced by Loraine Bracco. She’s kind of like Skuttle, if Skuttle was a girl and smoked ten packs of cigarettes a day. The kid who plays Lampwich is awful and doesn’t come off as a tough kid at all. He reminded me more of the Artful Dodger from Oliver Twist.

Tom Hanks as Geppetto is another mixed bag. He kind of works in the beginning, but then eventually, he loses his Italian accent (listen to him when he is on the boat).

I was especially disappointed to learn that Robert Zemeckis directed this film. He’s directed some great films such as “Who Framed Roger Rabbit?,” the “Back To The Future” trilogy, “Forrest Gump,” and “Contact.” I liked his animated movies too, like “The Polar Express,” “A Christmas Carol,” and “Beowulf.” You definitely see some of his direction in this, and you get the sense that he’s having a great time with the Stromboli and the Pleasure Island scenes. But “Pinocchio” is not one of his best efforts.

Warning: I’m about to get into spoilers, and some are major ones. I wanted to discuss the big changes that were made in this film, most of which I felt were not good changes.

The live action remakes that Disney has been putting out never surpass the original. They are just cash grabs with a built-in audience that has a fondness for the original animated movie. And it doesn’t help that most of them just aren’t any good. In the end, these movies still make a lot of money because people still go and see them out of curiosity and fond memories of the originals, but most of all, people go and see them because they still have hope that this time things will be different.

Pinocchio is not different. At times, it does offer something new, but usually, the new stuff doesn’t improve the story, but makes it worse. I think kids will like it, but if they have never seen “Pinocchio,” you know which one they should see first. Donkeys and all.