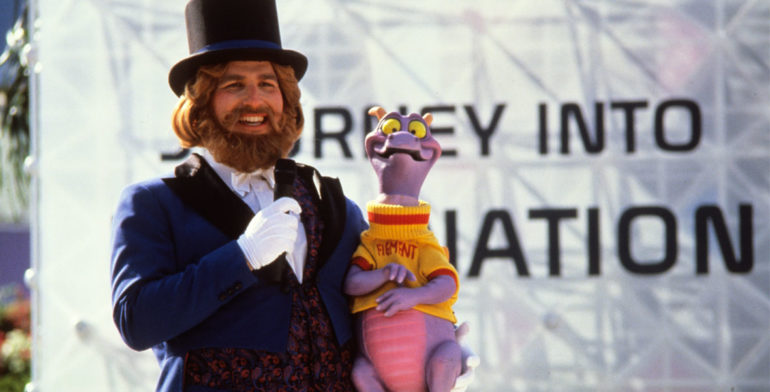 I can’t even tell you how many comments I have seen that said this or something of the like over the years. WDWNT can be harsh and critical when we need to be, but we also dump fair amounts of praise on various Disney Parks projects worldwide. However, that hasn’t stopped internet discourse that we are “pure negativity”, instead of having an understanding that meticulous dissection of each new thing comes from a place of love and a nerdy need to completely cover every aspect of an attraction, show, hotel, or whatever at our favorite places on Earth. I have seen people have started referring to me as “Eeyore” online in response to my opinions and demeanor, a nickname to which I take no exception as he is, in fact, my favorite (and objectively the best) of the Pooh & friends family.

I was honestly stunned to see what I would call “raging negativity” on social media after the wrap-up of the D23 Expo on Sunday. I was stunned because I, one of the most jaded and outspoken Disney fans, walked out of the Anaheim Convention Center with a sense of optimism I had not in many years. It is no secret that I was not a fan of Bob Chapek’s reign over Disney Parks and Resorts, which was trademarked by cheap lands, budget-reductions which cut the legs out from underneath what could have been successful projects, and even more nickel-and-diming of customers.

When the control of the division is passed over to another executive, it does take some time to see the change that is coming. After Chapek replaced Tom Staggs in 2015, it took a good 3 years before we saw what the parks would look like under him, starting with Toy Story Land at Disney’s Hollywood Studios. What’s funny is that now we are seeing a worldwide clean-up of the mistakes of Mr. Chapek (who deservingly was met with boos or silence from fans on last Friday), from additions to Toy Story Land and Avengers Campus, to the replacement of nighttime shows that came from his demands.

What Sunday said to me is that we, as Disney’s consumers, are heard.

“Yes, we know Dinoland is a mess right now and there’s a big fence and a dirt patch there.”

“Yes, we know you don’t like Harmonious and Disney Enchantment.”

“Yes, we know you love Figment.”

“Yes, we know the Magic Kingdom needs to spread out crowds.”

Josh D’Amaro stood on that stage and basically admitted that the Walt Disney World 50th anniversary was a disaster. What’s funny is I remember making a plea ahead of the event to install some sort of nostalgia into it, a post that was met with the usual berating from our most vocal detractors, simply thinking I write such things for attention. How did that 50th anniversary work out for you? I don’t write these things or do anything I do for attention. I do these things because I love Walt Disney World and all of these magical places. I owe so many memories, my most cherished friendships, and even my livelihood to the parks. It can be frustrating when continually putting my neck on the line to try to rally the fandom behind meaningful causes, sacrificing some followers, readers, and success in the process. My motives are often misconstrued and derided. However, so many do reach out in support of posts like those I made for the 50th anniversary, or more famously for The Country Bear Jamboree, and as always, I thank you deeply.

Back to the main topic though: How do you not see the positive direction we seem to be heading in? A Figment meet and greet is coming back to EPCOT! To me, this seems like a step in the right direction (and Tony Baxter seems to agree), that perhaps we are just one D23 Expo away from finally getting the announcement of a new ride with the beloved purple dragon, and maybe even our long-lost friend The Dreamfinder.

I still also believe that we will get the announcement that the PeopleMover is returning to Disneyland, it’s just too early for Disney to say it.

After so many complaints, they are throwing out Disney Enchantment and Harmonious, even after spending copious amounts of money on both of these shows. We have clearly been heard!

The Hatbox Ghost is coming to The Haunted Mansion at Walt Disney World!

While “blue sky”, we have some sort of inclination that there will be large expansions at both Magic Kingdom and Animal Kingdom.

Yes, we can’t escape the barrage of IPs and synergistic opportunities that are a necessity of Disney’s business today, but between all of that, it feels like there is a recommitment to quality and to what the most die-hard, and honestly, favorable guests are looking for.

We are not out of the woods yet as there are a number of problems still to be addressed at the parks (from that Reflections construction site eyesore, to the abandoned Play Pavilion and more), but you have to walk before you can run, and D23 Expo 2022 felt like a really positive first step. Certainly, things could go wrong, but I honestly think the management change in the Disney Parks, Experiences, and Products division is already showing its true colors. Yes, they are still going to pump out lands, attractions, and hotels laced with Disney IP, and yes, they are going to continue to raise prices, but it at least feels like we may get a quality product once more, one deserving of such a price tag.

I totally understand those upset that they may lose Dinosaur and Dinoland U.S.A., as I lost several attractions meaningful in my life (namely The Great Movie Ride), but I don’t think that is a reason to discount all the very positive announcements that came our way on Sunday. I am at least cautiously optimistic of what lies ahead with D’Amaro and team at the helm and I do believe they have the proper understanding of the division to do what is right for both everyday guests and us.

What do you think? Do you agree or disagree with my optimistic view? I’d love to hear from you in the comments and have a conversation about it.