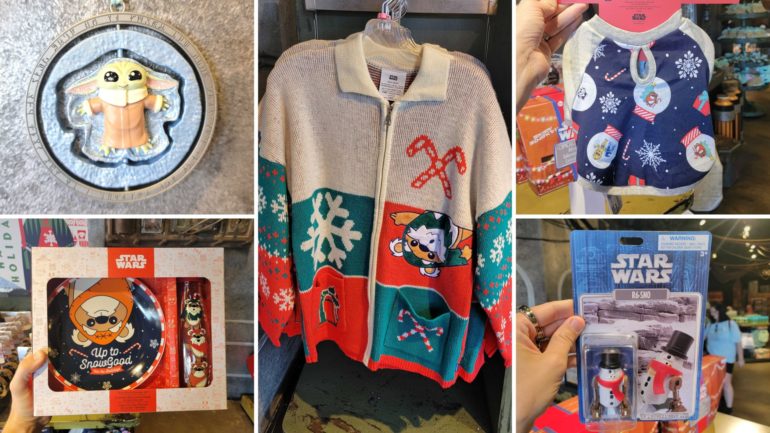 A new collection of “Star Wars” holiday merchandise and ornaments has arrived at Disneyland Resort.

We found all of this in Star Wars Trading Post in Downtown Disney District.

Candy canes, presents, and snowflakes are in red and green squares across the bottom of the sweater.

“Star Wars” is across the back.

This pullover sweater is similar to the one above, but with stripes instead of squares.

Two Ewoks are on this Christmas stocking.

Another Ewok pops out of the top.

This ornament depicts the iconic moment in “Star Wars: A New Hope” when Leia gives R2-D2 the Death Star plans.

This ornament resembles the gnarled knots of Dagobah trees.

Yoda stands in the center, lifting Luke’s X-Wing with the Force.

Darth Vader and Luke Skywalker are locked in combat in front of Emperor Palpatine in this ornament.

There are several in the collection but we only found Vader and C-3PO.

This white shirt reads “Up to snow good for the holidays.”

It has a red candy-cane-striped neckline.

Darth Vader is in a snowglobe on the center, next to a present and crossed candy canes.

This spinner ornament features Grogu from “The Mandalorian.”

There are three elements to the ornament — Grogu, a ring of snow, and a ring of Aurebesh. All three spin.

Your pet can dress up for the holidays with this shirt.

There’s a hole near the neck for a leash to go through.

Each one depicts a different “Star Wars” holiday scene.

This advent calendar is shaped like a Jawa sandcrawler.

Leave out some blue milk and cookies with this plate and cup set.

The plate reads “Up to snow good for the holidays” under an Ewok.

Ewoks are stacked on top of each other on the glass.

Two new nuiMOs outfits are available for Star Wars fans! This adorable outfit features an apron that reads “on the Sith day of Xmas”.

And this blue outfit has a holiday tie fighter hat with a matching lightsaber shirt!