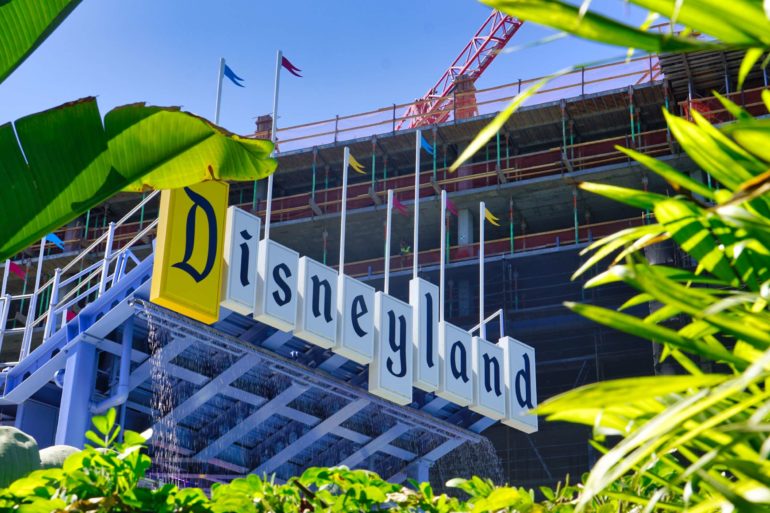 Hey there, hi there, ho there! We headed down to the Disneyland Resort to check in on the construction at two of the resort hotels and see what else was new in the park. So join us for this most recent photo report from Disneyland and the resort hotels.

To celebrate the upcoming release of “Hocus Pocus 2” on Disney+, there is a new photo op in Downtown Disney.

Guests can stand behind the cauldron and summon the Sanderson sisters from the moon.

Ducking into World of Disney before the park, we spotted this Tiana nuiMOs doll. We also found a couple of new nuiMOs outfits that match the human sized outfits just released at Eudora’s Chic Boutique.

Mickey and the gang were waiting for us on Main Street, U.S.A., when we arrived. They are all decked out in their new homemade Halloween costumes.

Dale was very proud of his costume and was strutting about showing it off.

This week’s pins include some ear headbands, a Dapper Day pin, and, most notably, some X-Men pins from the 90’s animated show.

Any time we find Gambit on some merchandise, it’s an immediate purchase.

Further up Main Street, U.S.A., our horse friend is all tied up with a festive Halloween ribbon braid.

Inside the Emporium, we noticed that some of the registers had been removed. With the advent of Mobile Checkout, these registers were less in-demand than they once were, so they have now been removed and replaced with more shelving space.

This is in the Crystal Arcade area of the Emporium.

We found a great selection of mugs, bottles, and tumblers today.

Most notably among the collection, this Haunted Mansion mug is one of our favorites.

This Binx votive holder looks like it might be a wax melter, or at least able to handle a votive candle, as would be expected from a votive holder.

But unfortunately, it is meant for electric votives only as the top of the cauldron could melt or crack.

This new Mickey and Minnie cartoon collection features the famous mouse couple in some of their early cartoons across many pieces of apparel.

This shirt has never not been on our minds since it was released on shopDisney, and now it has made its way into the park. It’s only in kids’ sizes at the moment; let’s hope they bring out some “big kid” sizes soon.

And joining the rest of the Tiana collection by Color Me Courtney, these overalls hide some secret embroidered characters and icons.

We found more of this collection over at Eudora’s Chic Boutique in New Orleans Square. This shirt matches the overalls, and this letterman’s jacket is a wonderful accompaniment to the outfit.

Also, in Eudora’s Chic Boutique featuring Tiana’s Gourmet Secrets, we have some actual foods now. These classic creole staples are must-haves for any New Orleans chef. Of course, the Café Du Monde Chicory Coffee and Beignet Mix are classics…

But the praline mix was a nice surprise.

All of these treats got us in the mood for something sweet, so we checked in on Pooh Corner to see the candy apples, cupcakes, hand pies, and more. And we even saw the Tigger Tails being made.

For some reason, the cold case was displaying bagged cookies that don’t need refrigeration. Interesting to see, nonetheless.

Jack and Sally were off making Christmas elsewhere, so their meet-and-greet area was open and accessible to take a look at.

We whistled and even laid a treat out, but Zero must not be home either.

In this meet-and-greet area, there are shelves full of villains merchandise available when Jack and Sally aren’t here. This super cool Ursula vase is a perfect Halloween display piece for your dead, dried seaweed bouquet.

And this awesome Maleficent dragon egg candle is “Villains Scented,” which means that all villains smell like an orange Push Up ice cream pop. It says Bergamot Dusk, but it smells like a Push-Up.

We love spotting these weird little hidden things that everyone passes by without taking the time to look. But if you’ve ever purchased anything at Pieces of Eight, Captain Chimp has watched you check out.

Up in Toontown, we can see the first signs of painting taking place on the spire of El CapiTOON Theater.

Heading over to Tomorrowland…

… we found this set of clutch handbags that is part of the Heroes and Villains collection. It’s a bit pricey, but so cool looking.

It got us in the mood for a flight on the Millennium Falcon, so we headed over to Batuu.

This picture really sums it all up. The transformation of Disney’s Paradise Pier Hotel is fully underway, and access is now restricted.

The front entrance to the hotel is now closed off, and guests enter through the back door.

Reception has been moved over to Pacific Ballroom C and D.

Read all about the changes right here.

Repainting work continues in some areas of the hotel, including here on the sign.

Much of the repainting is already completed, as can be seen here on the Fantasy Tower, which was the first to be repainted several weeks ago.

The Frontier Tower is the last to have painting ongoing along the sides of the tower.

The main area of construction, however, is the new Disney Vacation Club tower being built right next to the pool.

Construction is taking over the sightlines of almost everywhere, and between the building here and the remaining painting and maintenance going on elsewhere, it is very loud for the guests trying to enjoy the pool.

As we are bopping around the hotel checking in on the construction, it’s always nice to visit the decorations in each tower. Here in the Frontier Tower is the model of Big Thunder Mountain Railroad as it stands over in the park. The level of detail on this model is incredible, and we could just sit here and stare at it all day.

Outside the Frontier Tower’s back exit, the new Disney Vacation Club preview center.

It is currently closed, but we were able to walk up and take a look around the area.

It’s a beautiful building that is reminiscent of Walt Disney Studios in Burbank, about 35 miles away.

There is also a tiny house here that has Aulani model rooms to be toured as part of the DVC pitch.

One final parting shot from the Disneyland Hotel. Outside the Frontier Tower is a small pool and water feature. This is Cascade Falls and Ol’ Unfaithful, the water geyser. These are in homage to the original geyser and falls of the same names that were part of the Mine Train through Nature’s Wonderland attraction in Frontierland, in the area that is now Big Thunder Mountain Railroad. We haven’t seen Ol’ Unfaithful operating with water vapor and the light for the last few months, so it’s nice to see her back in play again.