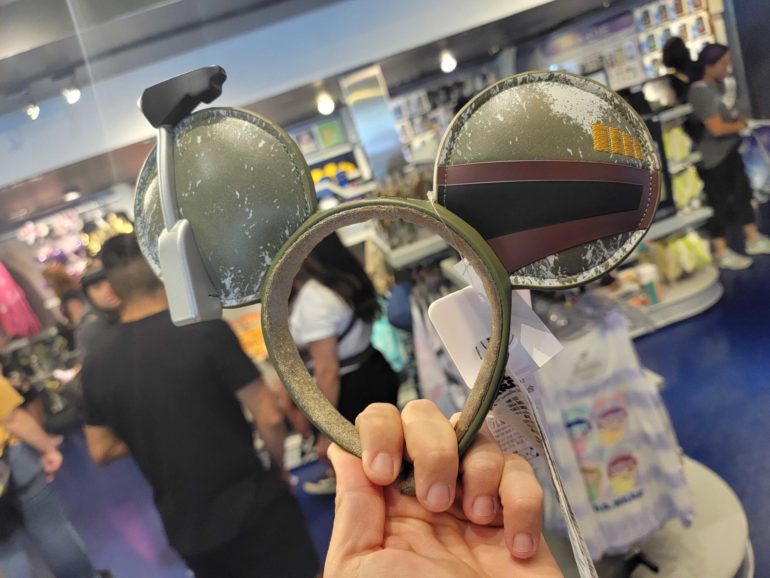 Lama Su and Obi-Wan Kenobi once said about Jango Fett’s son, “Fett demanded only one thing: an unaltered clone for himself. Curious, isn’t it?” He may not be one of a kind, but these “Star Wars” Boba Fett ear headbands we found in The Star Trader at Disneyland are pretty special.

The Boba Fett ear headbands feature a lot of the prominent markings and accessories from his customized suit of Mandalorian armor, including the rangefinder.

The battle-scarred ear headband is covered in an olive green reminiscent of his armor. The outer headband is also covered in the same material, while the inside has a distressed pale green velour covering.

One of the two generously padded ears has steel grey “scratches” throughout the ear representing the beskar underneath the paint.

The other ear, equally distressed, also has the addition of maroon and black markings similar to the coloring of Boba Fett’s helmet. In Legends, the color of a Mandalorian’s armor had different meanings — Fett’s was green for duty, red for honoring a parent, and black for justice. Those (and many other details of Mandalorian culture) have not been confirmed as part of the new Disney canon.

The back of the ears has more distressing, exposing more of the beskar.

On the left side of the headband is “Boba Fett” embroidered in metallic maroon stitching.

Are these the ear headbands you were looking for? Let us know in the comments below.

Check out the other “Star Wars” themed ear headbands available at Disneyland: