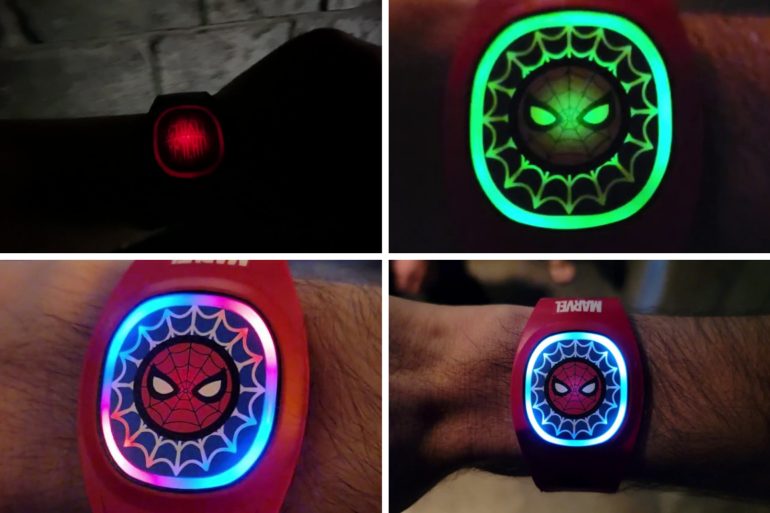 MagicBand+ is now officially available for all guests at the Disneyland Resort, so we’re visiting Disneyland and Disney California Adventure to see what kind of effects they produce. The MagicBand+ can do many things, like function as admission media, check in for Lightning Lane, connect with PhotoPass, and interact with elements around the park.

We visited many attractions at both Disneyland Resort theme parks to see how the bands would interact. They triggered unique Lightning Lane tapstile sounds and interacted with the rides in unique light patterns and haptic (vibrations).

Not every attraction had an interaction, and we aren’t sure if they intend to connect MagicBand+ with all of them. However, a few of the most popular attractions caused our bands to at least light up. When we tapped into the Lightning Lane for Haunted Mansion Holiday, the touch point glowed green and played an eerie snippet of music.

Just after tapping, our band glowed purple and green. Of the rides today that had interactions with the MagicBand+, Haunted Mansion was by far the most unique.

But the spooky fun doesn’t stop there! During the last portion of the ride, our band had a pulsing red glow, not unlike the Bride’s beating heart. It continued as we exited the ride.

We expect this interaction to stay the same when the attraction transitions back to the standard Haunted Mansion in January, but we’ll be back to investigate.

Guardians of the Galaxy – Mission BREAKOUT!

What’s a Guardians of the Galaxy experience without some great music? When we exited the ride, our MagicBand+ flashed green and purple, alternating from the top to the bottom of the center puck to have a neat dance party with the songs playing as guests depart.

Both Avengers Campus attractions had interactions with MagicBand+.

WEB SLINGERS proved to have one of the most interesting effects. It started flashing red and blue and vibrating while we were still in the vehicle at the end of the ride, but the effect zone extends from the unload area all the way to the exit ramp.

Each time a new vehicle pulls into the unload area, it triggers a different lighting pattern on the band.

Soarin’ Around the World

When we exited Soarin’ Around the World, our band had a blue glow, which lightly pulsed in the center of the puck.

Watch our video of the MagicBand+ interactions with Disneyland Resort attractions below.

Which effect is your favorite? Share your thoughts in the comments!

For more about MagicBand+ at Disneyland Resort, check out the following articles: