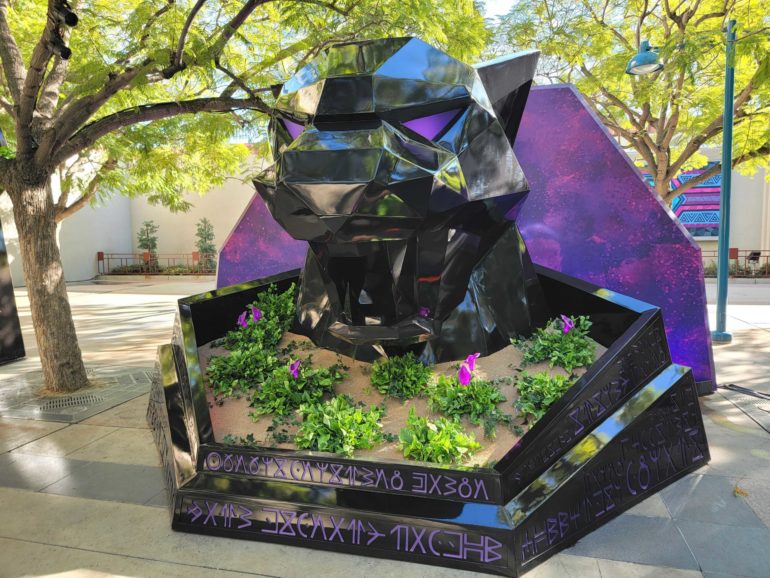 The garden honors the Black Panther mantle, inviting guests to “relax and reflect on the legendary protectors of the Kingdom of Wakanda.”

Purple and black obelisks in the garden feature Wakandan letters spelling out the names of some of the Wakandan tribes. This one reads “Border Tribe.”

This obelisk reads “Kings Guard.” A “Wakanda Forever” banner hangs across one wall.

There are a few tables and chairs in the courtyard, and African-inspired lanterns hanging from the lampposts.

A giant Black Panther head is at the center, sitting in a planter in front of a purple background.

The sides of the planter feature more Wakandan lettering carved in purple against the black.

The planter holds the Heart-Shaped Herb, the purple flower that gives Black Panthers their power.

Some of the billboards in the courtyard have been covered with black fabric.

A quote from King T’Challa is on the back of this purple wall. It reads, “Wakanda will no longer watch from the shadows… we will work to be an example of how we, as brothers and sisters on this earth, should treat each other. Now, more than ever, the illusions of division threaten our very existence… we all know the truth: more connects us than separates us. But in times of crisis, the wise build bridges while the foolish build barriers. We must find a way to look after one another, as if we were one single tribe.”

Watch our video tour of the garden:

Shuri’s Panther Gauntlet beverage holder is now available. A Flavors of Wakanda marketplace debuted at Festival of Holidays as part of the celebrations. Check out our review of all the offerings here. Guests can also see a mural at Downtown Disney District inspired by the “Black Panther: The Courage to Dream” children’s book. The mural was painted by the book’s illustrator, Nikkolas Smith.