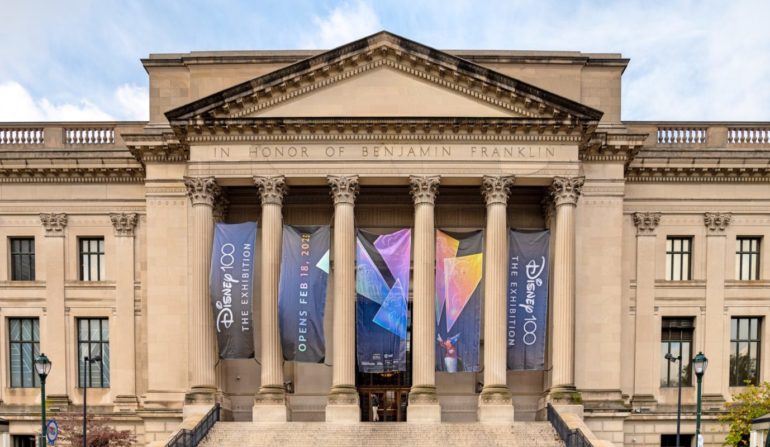 Today, Disney unveiled new details on the upcoming Disney100: The Exhibition, celebrating the centennial of The Walt Disney Company. The Disney 100 Years of Wonder World Tour will debut on February 18, 2023, and run through August 27, 2023, at Philadelphia’s Franklin Institute.

In addition to the announcement, five items from The Walt Disney Archives were unveiled, however, they kept them under wraps until the very end.

Created for the 100-year celebration of The Walt Disney Company, the exhibition invites guests to step into their favorite stories using innovative and immersive technology throughout ten galleries in the 15,000-square-foot exhibit.

Disney fans who have attended any of the D23 Expos in Anaheim, California, or Destination D events at Walt Disney World are no strangers to the various exhibits from the Walt Disney Archives. However, for the Company’s 100th anniversary they are opening its vault of treasures. The ten galleries will showcase more than 250 of its “Crown Jewels,” rarely seen original artworks and artifacts, costumes and props, and other memorabilia.

After Philadelphia, Disney100: The Exhibition will head to Chicago, Illinois and Kansas City, Missouri as the next two stops on the North American tour. The international unit of the exhibit will open on April 18 in Munich, Germany, with more cities to be announced in the coming months.

Tickets are timed and dated, and advance ticket purchase is strongly recommended. For information on purchasing tickets, please visit www.fi.edu.

“We have this incredible collection because we get first dibs off of every film that wraps and every attraction that is changed,” said Becky Cline, Director of the Walt Disney Archives.

“When we first conceived this exhibition we looked at the many ways of doing it,” said Cline. “Would it be a chronological approach … how are we going to tell this amazing story? We realize that everything that we do at The Walt Disney Company is based on the philosophies and dreams and practices of our founder Walt Disney. “

Cline then said that Walt always said the company was all started by a mouse and “while that was very true – in reality, it was also started by a man. A very, very special man. ” She went on to say that they decided to create an exhibit that illustrates Walt’s own ideas and his dreams and how we shared and followed in his footsteps ever since 1923, when the company was founded.

“This exhibition celebrates everything from 1923, when we first started, up to what’s coming up in the next year, stated Cline. “There are ten galleries in this exhibition and each one represents one of Walt’s philosophies.”

Six of the galleries, along with renderings, were unveiled today, including Where It All Began, Where Do The Stories Come From, Sources of Inspiration, The Nautilus Window, and Your Disney World: A Day in the Parks.

Where It All Began

This gallery introduces visionary filmmaker and innovator Walt Disney and his philosophies that laid the foundation for the Walt Disney Company. Guests will explore his story from before Mickey Mouse to Mickey’s debut in “Steamboat Willie” in 1928 to the fantastic breakthroughs in animation during the early 1930s.

Here we can see they include archival footage from “The Alice Comedies” and “Oswald the Lucky Rabbit.” In addition, the exhibit will tell the story of the creation of Mickey Mouse (and Minnie) and more.

Where Do the Stories Come From?

A gallery dedicated to the art of storytelling with ever-changing multimedia environments that illustrate how Disney storytellers bring characters to life. Guests can explore the sources of inspiration for Disney’s most beloved and iconic films through art and artifacts from Snow White and the Seven Dwarfs, Frozen, and The Princess and the Frog.

“Storytelling is at the heart of everything that we do at Disney,” said Cline. “Everything is about the story first and making sure that it is absolutely perfect.”

This gallery will include some of Disney’s most iconic films from “Snow White and the Seven Dwarfs” to “Frozen,” “The Princess and the Frog,” and “Encanto.”

From classic fairy tales and legends to original creations, this immersive and interactive installation invites visitors to explore the literary influences behind some of their favorite stories and see how they inspired Disney artists and storytellers.

The goal of this exhibit is to celebrate where these stories come from – whether they are from fables, fairy tales, a comic book, and from the storytellers at Disney. In this image, visitors will be able to use interactive screens to learn more about a number of novels including “Alice in Wonderland” and “Mary Poppins.”

The Spirit of Adventure and Discovery

From the depths of the ocean and the mysteries of the jungle to the outer reaches of the galaxy, Disney adventure stories from Disney, Star Wars, and the Marvel Cinematic Universe invite exploration and discovery.

The room will have a number of interactive treasure chests where children can embark on a quest to uncover hidden artifacts from classic Disney films.

Guests can peer through an interactive window of Captain Nemo’s legendary submarine, as seen in 20,000 Leagues Under the Sea, for a glimpse of Disney and Pixar’s enchanting underwater worlds.

Your Disney World: A Day in the Parks

Guests step into a recreation of Main Street, U.S.A., to explore the legacy and development of Disney parks and attractions worldwide.

This exhibit transports guests to a Disney Park. It will feature artifacts from current and former attractions from various Disney Parks. In the left foreground is a Space Mountain ride vehicle from Disneyland in the background is a ride vehicle from Peter Pan’s Flight. On the right is a Main Street, U.S.A. façade with various items such as a doll from “it’s a small world” and the miniature models used on the “Adventure Thru Inner Space” attraction at Disneyland. To the far right, is Mickey Mouse, dressed as a train operator, that Walt Disney used on the opening day of Disneyland. The center has a large, interactive display to explore Disney Parks throughout the world.

Another unique feature of this exhibit is throughout the day the “park” will go from daytime to nighttime. So visitors will be able to experience the “park” at both times of the day.

Cline unveiled five items from The Walt Disney Archives that will be a part of the upcoming exhibition. They are:

Disneyland Employee Badge #1 (1955) – Issued to Walt Disney. When Disneyland first opened and until 1962, Cast Members did wear name badges, but originally a number was on them and not their name. This badge has a #1 on it and was issued to Walt Disney. He briefly wore it during the rehearsal for Disneyland’s Opening Day in 1955 and, later, on television in The Disneyland Tenth Anniversary Show (1965).

Magic Ring from The Shaggy Dog (1959) – This ring was used by Tommy Kirk (Disney Legend) in the film, “The Shaggy Dog.” Kirk accidentally discovers the magic ring in a museum and after saying the Latin inscription on the band, he transforms into a sheepdog. The inside of the ring says “In canis corpore transmuto” or “Into a dog’s body I change.

In this new promotional video, which debuted at the event, Cline pointed out that the soundtrack for the video was composed by Steve Mazzaro. His name may not be familiar to most, but his music certainly is.

Mazzaro’s work can be heard on the soundtracks of “The Lion King” (2019), “Pirates of the Caribbean: Dead Men Tell No Tales,” and “The Lone Ranger.”

“In 1923, Walt Disney set our company on a path that would revolutionize the entertainment industry, creating unforgettable stories, beloved characters, and unparalleled experiences that generations of fans around the world have enjoyed,” said Becky Cline, director of the Walt Disney Archives. “This incredible exhibit will take guests on a remarkable journey from those earliest days into Disney’s dazzling future using seamless technology, a rich musical score, and—of course—treasures from the Walt Disney Archives collection.”

“The Franklin Institute has spent almost 200 years bringing stories of innovation and discovery to the public in an immersive and interactive way, so Disney100: The Exhibition is a perfect fit for us and our audience,” said Larry Dubinski, President and CEO of The Franklin Institute. “We are proud to host the world premiere at The Franklin Institute so fans across Philadelphia and beyond can have the first opportunity to see these crown jewels come to life in beautifully crafted galleries reflecting Disney’s imaginative storytelling, innovation, discovery, and wonder.”

Disney100: The Exhibition is created and curated by the Walt Disney Archives and Semmel Exhibitions. The Franklin Institute is proud to present and play host to the world premiere of Disney100: The Exhibition in the Nicholas and Athena Karabots Pavilion and the Mandell Center. PECO, the Premier Corporate Partner of the Franklin Institute, is the Local Presenting Sponsor of the exhibition, and PNC is the Associate Sponsor.

Are you going to make a trip to Philadelphia next February to see this special exhibit? Let us know in the comments below.