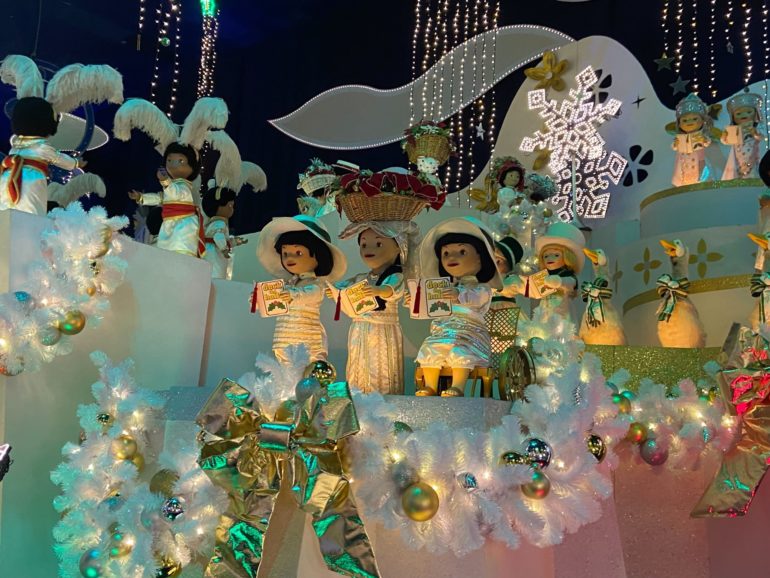 The holiday season has officially begun at Disneyland Resort, and “it’s a small world” Holiday is back for another year of festivities. This year, two dolls with wheelchairs were also added to the ride as part of Disney’s ongoing diversity initiative. The dolls are expected to be added to the versions of “it’s a small world” at Walt Disney World and Disneyland Paris next year.

White garland and ornaments have been added to the load area.

The façade and animal topiaries will be lit up at night.

More garland and a wreath hang above the boat entrance into the building.

Decorations have been added to every inch of “it’s a small world,” including snowflakes, toys, and more.

A “season’s greetings” banner hangs across the track at the UK section.

There is a Christmas tree covered in (fake) candles next to dolls of Alice and the White Rabbit.

The ride celebrates multiple holidays, including the new year with this “2023” sign.

Gingerbread men hang from the ceiling.

Fireworks are featured in the China section.

The garland and lights blend in with the jungle vines.

The first wheelchair-using doll is here in the Mexico section.

It is the third doll on the right of the carolers.

Lilo and Stitch are celebrating a “mele kalikimaka.”

There are tiki versions of Santa’s reindeer.

Another archway reads “Ho ho holidays!” next to a cactus decorated like a Christmas tree.

In the final room, a snowman holds a “Happy holidays” sign. There are even more giant glowing snowflakes.

Circles of lights hold images representing each of the rooms, with holly and dangling lights below.

The second doll in a wheelchair is here, representing the previous caroler.

The exit tunnel features giant holiday postcards from around the world.