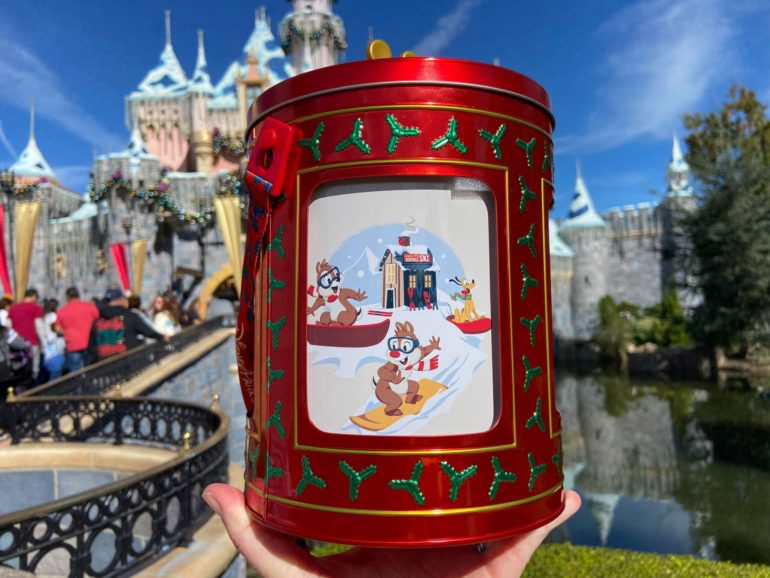 When Disney releases a new popcorn bucket, guests expect a mold of a character, object, or even just plain bucket that can hold popcorn within, but all of these options tend to always be plastic. Now, Disney has released a popcorn tin for the holiday season that also plays music!

We recently saw the musical popcorn tin arrive at Walt Disney World Resort, and now it is also available for purchase at Disneyland Resort!

The Musical Rotating Popcorn Tin is part of the Delivering Holiday Cheer collection. It not only serves as a souvenir for guests but comes with Disney’s iconic and mouth-watering popcorn. The popcorn tin has multiple open sides which showcase a variety of the classic Disney characters partaking in holiday activities, such as Chip, Dale, and Pluto enjoying the snow!

Above, we can see another scene on the popcorn tin, which showcases both Goofy and Donald hitting the ski slopes, however, it seems that Goofy may be a little too tangled up in the sport! For those who love to receive a classic popcorn tin for the holidays, this is the perfect gift.

There is also a classic Christmas tree decorating scene with Mickey Mouse, Minnie Mouse, Chip, Dale, Pluto, Donald, and Goofy. It seems Daisy is missing, but she’s probably out shopping for some Christmas presents.

The images will spin as the music plays on the popcorn tin after the crank is twisted a few times, much like any jewelry box or snow globe that plays a song. In this case, the bucket plays the theme from the iconic “A Christmas Fantasy Parade” right here at Disneyland.

The top of the tin is just as adorable as the surrounding images, as the lid has a golden Mickey that can be used to open the bucket.

The inside of the tin is plain and silver, as to be expected with a metal design.

The tin also comes with a lanyard that displays the Disney Parks logo as well as some Christmas holly, making it easier to carry around the theme parks after making your purchase!

If you want to check out our TikTok, where we show off the popcorn bucket during Mickey’s Very Merry Christmas Party in Disney World’s Magic Kingdom, click here.

If you are planning on visiting Disneyland Resort during the Christmas and Holiday season, you will be flooded with plenty of different seasonal offerings! From food to merchandise, Disneyland has everything you can think of to add an extra sprinkle of pixie dust and magic to your holiday. Be sure to check out all of the delicious booths during the Disney Festival of Holidays, as well as the spectacular cultural performances during Disney ¡Viva Navidad! The fan-favorite World of Color will also see a holiday change as World of Color – Season of Light takes over!