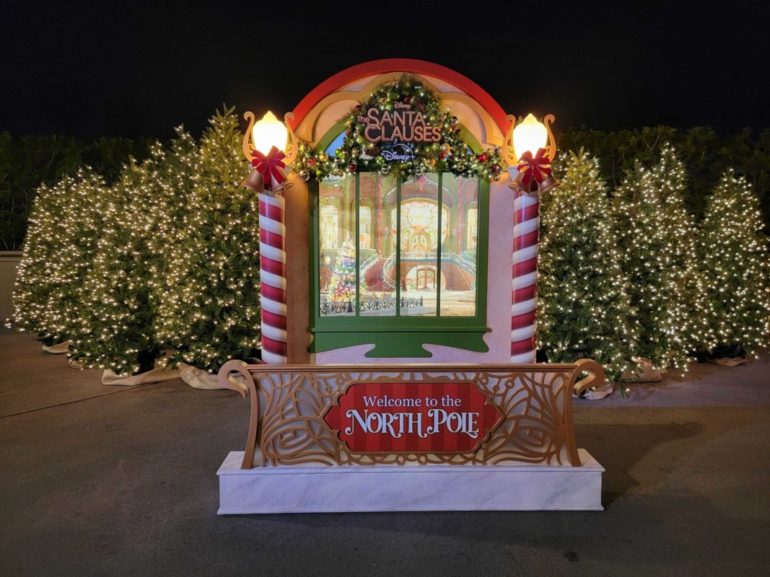 Santa Claus has come to town… or at least, the North Pole has, thanks to a new photo op for the Disney+ Original Series “The Santa Clauses” in the Downtown Disney District.

The photo op depicts a scene from the North Pole as it appears in “The Santa Clause” trilogy of films, as well as the upcoming series. An ornate copper gate on a marble-looking pedestal displays a red sign reading “Welcome to the North Pole.” You can find it near Splitsville Luxury Lanes.

Behind it is a window that looks out into Santa’s workshop, flanked on either side by a candy cane-colored lamppost decorated with a red bow. Behind it is an army of lit Christmas trees.

Above, the show’s logo appears in a wreath decorated with colorful ornaments and lights. As seen in the video above, the some of the lights go on and off.

Premiering Wednesday, November 16, the six-episode series picks up years after the films, where Santa, aka Scott Calvin (Tim Allen) is about to turn 65, and finds he’s losing his magic. He decides to retire and spend more time with his family, including his wife Carol (Elizabeth Mitchell), son Cal (Austin Kane), and daughter Sandra (Elizabeth Allen-Dick). A successor is found, though trouble soon follows, and Christmas is in danger of disappearing forever. Also part of the story is Simon Choski (Kal Penn), a, game inventor, and product developer, and single father to his daughter Grace (Rupali Redd), who finds a trip to the North Pole changes the course of his life forever. Laura San Giacomo has also joined the cast as La Befana, the Christmas witch known in Italian lore.

Does this photo op make the top of your nice list? Let us know in the comments!