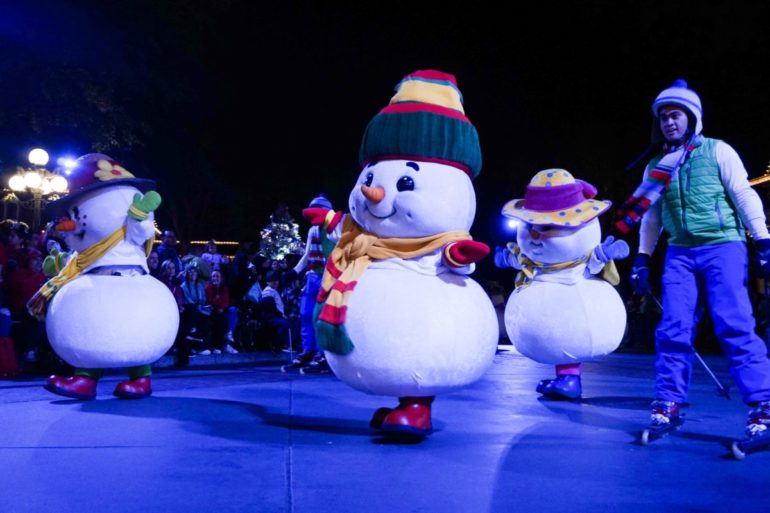 The holidays have begun at Disneyland Resort! At Disneyland Park, A Christmas Fantasy Parade has returned for twice-daily performances.

The marquee float kicks off the parade. A jewelry box ballerina twirls to the theme while a cuddly teddy bear dances along.

They are followed closely behind by a toy marching band.

Mrs. Claus leads a troupe of elves who bear letters to Santa in their mail pouches.

The next float is a cozy cabin where Mickey and Minnie have set up their tree and gifts. Chip and Dale are hard at work sorting Santa’s mail while Donald is up on the snowy rooftop.

Skiiers and snowpeople glide along behind.

They’re bundled up for this chilly California night.

Shimmering snowflakes on skates are the next group to follow.

Appropriately, Elsa, Olaf, and Anna are right behind them.

Clarabelle Cow and her baker friends have cooked up sweet gingerbread cookies.

They are followed by Goofy and Pluto upon a gingerbread float. Pluto is on the roof while Goofy, in his chef coat and hat, is at the workbench. The float is glazed with icing and coated in candies.

Even Goofy’s workbench is made of peppermint sticks.

Next, the crowd gives a royal welcome to Snow White, who leads a court of dancers.

The small float of Princesses and Princes follows behind, carrying Tiana and Naveen, Cinderella and Prince Charming, and Aurora and Philip.

The fan-favorite dancing reindeer signal the beginning of the end for the parade.

If you love the reindeer, check out the Christmas Parade Reindeer Sipper that just debuted.

Santa soars high above the snowy float and Christmas trees in his bright red sleigh.

He’s departing the North Pole with a sack full of toys!

Watch our full video of A Christmas Fantasy Parade below.

A Christmas Fantasy Parade has been a Disneyland tradition since 1995 when it replaced A Very Merry Christmas Parade. The parade will be performed daily at 3:30 p.m. and 6:30 p.m., except for Christmas week, when performances will be at 2:00 p.m. and 5:00 p.m.

For more Disneyland holiday celebrations, check out Mickey, Minnie, and friends in their holiday outfits, the “it’s a small world” holiday overlay, and the “Nightmare Before Christmas” Haunted Mansion Holiday overlay.

Guests celebrating other winter holidays can find entertainment, decorations, and food for Hanukkah, Diwali, and Kwanzaa as well.

Over at Disney California Adventure, World of Color – Season of Light has returned, and the Festival of Holidays has kicked off with tons of dishes and drinks, including the new Visions of Sugarplums marketplace. ¡Viva Navidad! has also returned for the holiday season.

There is also a ton of new merchandise for the holidays. Check out the latest releases below.