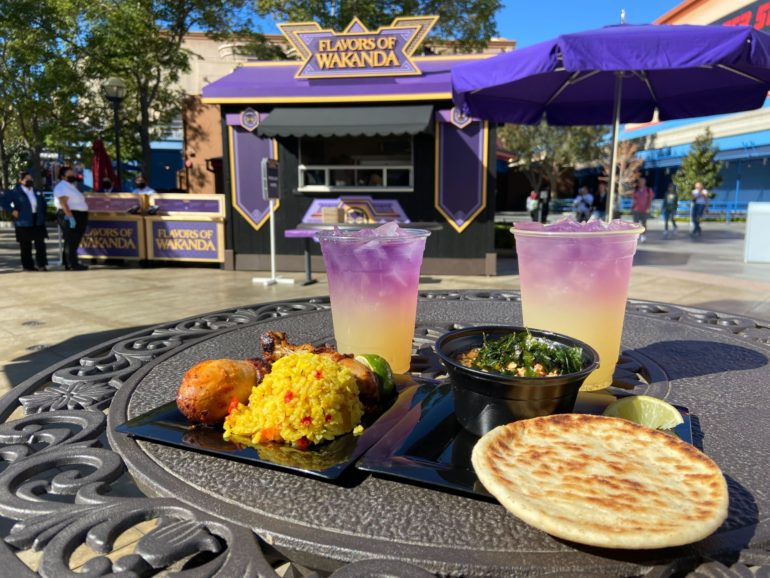 New to Festival of the Holidays at Disney California Adventure is a Black Panther-themed booth, Flavors of Wakanda! Bringing traditional Wakanda flavors to the festival, we’ve been excited to try this booth since it was announced.

This is a ground peanut stew, a traditional dish from West Africa.

It’s got a very complex spice flavor profile. So complex, in fact, that one can scarcely understand what they are eating.

Peanut is the predominant flavor, with a hefty spice note coming behind. The creaminess of the broth and the tomatoes are present as well, but more as a textural component than any real flavor notes.

The portion size is adequate as it is so busy with different flavors that the diner needs to take a short break after consuming this dish to process what they just had.

It’s delicious and creamy, and we just can’t figure out what’s going on, but we will keep trying until it’s gone.

Peri Peri is a hot sauce made from African bird’s eye chili. Although the dish is named for Peri Peri, none of the spice is present. Not only is it not spicy, but it’s actually rather bland.

The lack of spiced flavors, especially when eaten alongside the maafe, is definitely noticeable.

This dish is safe to give to a fussy two-year-old who only wants plain chicken for every meal.

The rice is pleasant and rich in flavor. It’s not necessarily complex but definitely has depth from a combination of savory spices and vegetables.

Overall, we were looking forward to this dish a lot, and we’re a little let down, but that doesn’t mean it’s necessarily bad. It’s just average chicken.

This is just your average, run-of-the-mill lemonade with the addition of a colorful butterfly pea tea to impart a purple/blue color.

This is the de facto national drink of Kenya, being the most popular drink in the country, based on an import from a Brazilian cocktail. The cocktail originated in Nairobi and grew to prominence throughout the country and the region. That cocktail, however, is not this one.

This is a vodka lemonade with ginger beer. It’s fine, it’s not unpleasant, but it’s definitely not what we were expecting from dawa. The alcohol is rather stringent, and the lemonade is very sweet, but it’s a rather mundane cocktail. The addition of the ginger beer brings a level of spice that we wished the other lemonade would have had to tie in with the flavors of Wakanda, so just for that, it is more enjoyable than the lemonade on its own. But overall, we hesitate to return for this cocktail not only for the flavor profile but also for the price point.

With Marvel eateries available in Disney California Adventure, like the Pym Test Kitchen and Shawarma Palace, we’re excited that a Black Panther-themed marketplace was added to the festival this year, and we hope to see more themed booths in the future.

Watch our video review of the Flavors of Wakanda booth below, and stay tuned for coverage of the other Black Panther celebrations when they begin tomorrow.