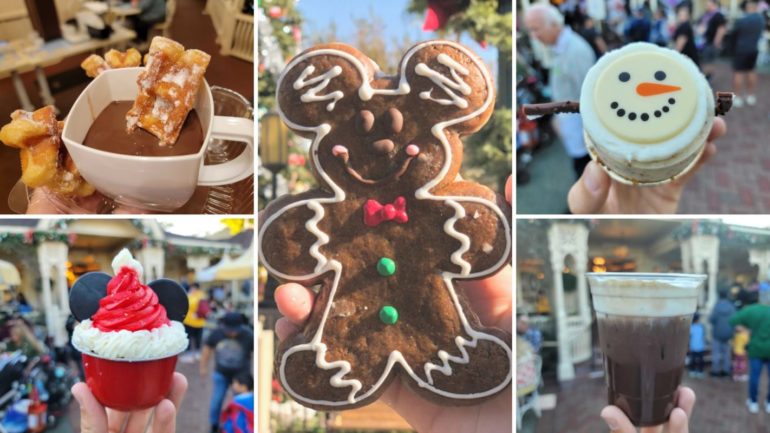 REVIEW: Have a Festive Feast With Classic Thanks-Mas Sandwich, New Desserts, and More From Jolly Holiday at Disneyland

If you’re looking for a full festive feast, Jolly Holiday Bakery Cafe at Disneyland is where you want to be. From the returning classic Thanks-mas Sandwich to the new Snowman Cinnamon Roll Cheesecake, there are tons to choose from.

This meal is perfect for any person craving that Thanksgiving meal. With turkey, stuffing, and cranberry sauce, taking a bite of this will bring back all those warm holiday memories. The turkey was delicious, and the stuffing was tender and had a perfect consistency.

It’s hard to mess up any noodle soup. This soup tastes pretty much like a pot pie without the crust. It consists of turkey, noodles, broth, vegetables (celery, carrots, onion), and a sprinkle of herbs.

The small portion of turkey doesn’t really make this a different flavor than a normal chicken noodle soup. It’s also buried in the salt of the broth and the pepper seasoning.

Sipping Chocolate with a Dipping Waffle – $6.00 (Late Night Dining Only)

Thick & Rich Sipping Chocolate with a Sweet Waffle for Dipping

This is our all-time favorite Disneyland sweet treat. It was included on the late-night menu during Merriest Nights last year, and we thought it was going to be a party exclusive. We’re so happy they brought it back and that everyone has a chance to try it in the evenings. It is on the late-night menu, which starts at 8:00 p.m. and because of the popularity of Jolly Holiday, mobile orders need to be placed considerably early in the day if one wants to access the late-night menu before the fireworks. Failing that, the line stretches way out the gate, so be prepared for a wait.

But once you reach the front of that line, boy, is it worth it. This chocolate is so rich and decadent that it’s unbelievable. It’s almost like a melted chocolate bar, but thinner and easy to sip. The included waffles are sugary and soft, perfect for dipping in the warm sipping chocolate. Sitting on Main Street to wait for the fireworks or just looking at the tree in the castle with a cup of sipping chocolate and a few waffle sticks is a perfect finale to a day at Disneyland. We can’t say enough good things about this treat.

This little cheesecake was fair to middling. It’s better than we expected but still only decent.

The harsh tang of the cream cheese is offset by the cinnamon roll influence, which makes it a more enjoyable cheesecake than we are used to. But overall, it still didn’t wow us.

It is, however, very cute.

This item is also returning. It is filled with mint and chocolate ganache. If you are a fan of candies akin to Junior Mints, then this is the treat for you. On the flip side, if you are not a fan of Junior Mint-type candies, then this is probably one you can skip without regret.

The entire top half of this treat is frosting. When you have that much frosting, it had better be very good. Luckily, this one is. In fact, the frosting on top ends up being the star of the show. It is soft and fluffy and creamy and melts in your mouth, a perfect accompaniment to the very dense, thick chocolate brownie that resides in the cup.

Overall this was a fine treat, but we’re not sure that we would have it again because there are so many other treats that we enjoyed more.

This cookie is everything you want it to be. Sweet, soft but crunchy, and covered in icing.

The gingerbread taste was strong, so if you aren’t a fan, maybe try one of the other cookies. The icing was sweet and added a vanilla note to the cookie. Plus, it looks great on the smiling Mickey cookie.

On the back of the cookie was the same icing. A pleasant touch and an added extra bit of sweetness.

The Mickey Mouse Gingerbread cookie is available at many locations across the resort.

This is a raised yeast donut that has some heft and body to it while still remaining light and fluffy.

The center of the donut is filled with apple pie filling and then encased by a large dollop of frosting.

The rest of the round donut is frosted on top with a very sweet apple frosting that tastes more like an apple scented candle than the real thing. Unfortunately, it was so off-putting that it made the whole donut unpalatable.

This is a very nice chocolate cold brew, though not as smoky as we would like. The hickory flavor comes through, but not really with a smoky characteristic so much as just straight hickory wood.

It’s considerably sweet with the chocolate as the predominant flavor.

It could stand to be a little more coffee forward to pair the roastiness of the cold brew with the smoke. But that being said, it’s not unenjoyable, and it’s just a good chocolate cold brew that is a welcome pick-me-up in the afternoon.

Jolly Holiday is also supposed to have a Peppermint Cookie Donut, but it is not available yet.