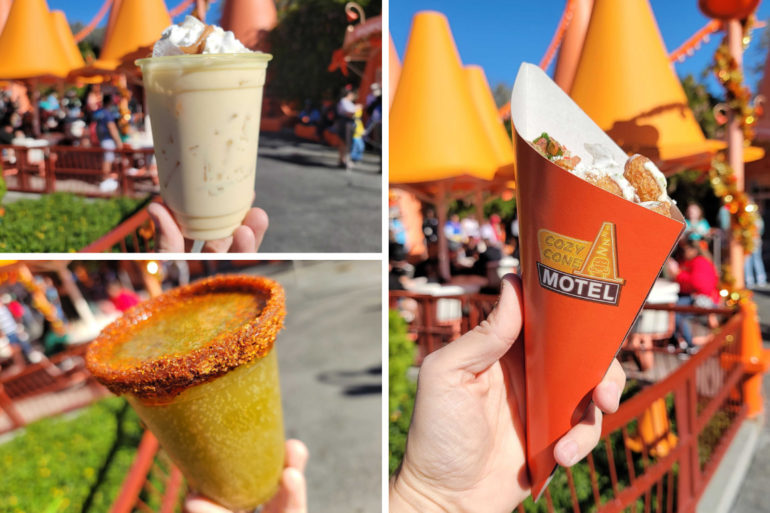 For a rollickin’ holiday at Disney California Adventure, pull up to the Cozy Cone Motel and try one of the many festive foods on offer. This year, new Esquite Corn Fritters, a Peanut Butter Whiskey Cocktail, and more join the lineup.

The new Esquite Corn Fritters can be found at Cozy Cone 5. These little corn fritters are delightful. They’re sweeter than a tater tot because of the sweet corn, but they’re not quite as savory as a hush puppy.

They sit somewhere in between with a heavy, thick, fried crust. The cilantro lime dressing provides a creamy and tart kick to accompany the pico de gallo, making for a more complex and interesting dish overall. We thoroughly enjoyed these, and they are great walking-around food.

The savior of those slogging their way through the excess of holiday sweetness. Disney guests cannot live on sugar alone. Those who try will welcome the savory sanctuary to be found in Luigi’s Chicken Pesto goodness. Creamy pesto Alfredo pasta, marinated chicken, balsamic reduction, Bruschetta tomatoes, and Romano cheese will restore hours of energy. You can find it at Cozy Cone 3.

The sauce tastes like canned pumpkin for dipping. It’s not overly sweet — in fact, it’s barely sweet at all — but this works in favor of the churro because so often, the sugary churro dipped in a sweet frosting can be overpowering and just too much. This is a good compromise, and you can find it at Cozy Cone 1

with chile-lime seasoning and lime

This and the Peanut Butter Whiskey Cocktail below can be found at Cozy Cone 4.

This was an immediate no, more so than anything else we’ve had at Disneyland. This is absolutely abhorrent. It sounds like a bad idea on the menu, but we tried it anyway, and we regret it. It looks like dumpster juice, and it tastes like stomach acid. A spicy stomach acid, with notes of floral hops. One sip was too much, but we tried a second and third sip to be sure. Micheladas aren’t bad, but this tangerine IPA is the wrong choice for one.

This is a good idea, but it falls a little flat in execution. The peanut butter, ice cream, cinnamon, and almond milk work very well together, almost like a peanut butter horchata variant. We really wish that the whiskey flavor would come through more, but it is entirely hidden in this amalgam of creamy peanut butter. That’s really the only downside to this cocktail, which is still leagues better than the michelada above.

You can also get a Christmas Tree Cone, which is a peppermint soft-serve with holiday sprinkles, at Cozy Cone 2 for $5.49.