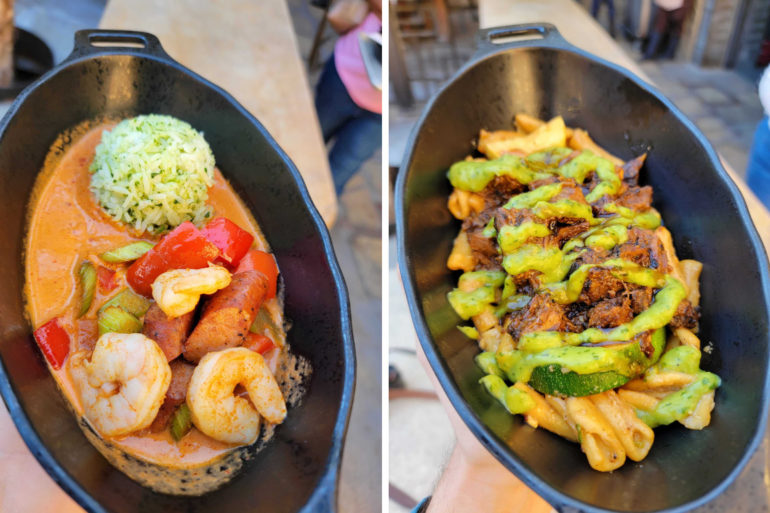 Trandosha is home to the Trandoshans, who are reptilian in appearance. The most notable Trandoshan in “Star Wars” is Bossk, a bounty hunter who hunted Luke Skywalker and sometimes worked alongside Boba Fett.

Bantha, whose meat has been used in several dishes on Batuu, are used as pack animals and mounts. They are large, furry mammoth-like creatures with spiral horns seen in many “Star Wars” properties.

This is one of the best dishes on the menu here and one of the most ample and filling portions. The pasta is very garlic forward but not obtrusively so, in that you can still taste the pasta and cracked pepper flavors incorporated within. The braised bantha (probably beef short rib) is chili spiced in flavor but not in spiciness.

It’s tender and delicious, with just enough spice to bring it to life without burning away your palate. The avocado sauce on top is bright and fresh, bringing a pop of citrus and greens to the otherwise heavy dish. As good as all of these things are, they work better individually than they do together as one coherent dish.

We are usually fans of quality ingredients coming together into a quality dish that’s more than the sum of its parts, but this one is actually more enjoyable as three separate ingredients to switch back and forth between, rather than all in one bite.

Yobshrimp are a type of sea creature native to Naboo, Padmé Amidala’s homeworld. They were first mentioned in a 1999 video game but did not appear in any of the films. While mentioned on a menu in “The Mandalorian,” they made their first debut for Galaxy’s Edge.

This is an elevated version of a pan roast stew with a curry twist. The pan roast sauce is curry and creamy tomato, but the curry doesn’t overpower the tomato flavor. It does have a touch of heat to it, but for those who are fans of spice, it is very enjoyable. It reminded us of the Cajun Pan Roast Soup at Pacific Wharf Café over at Disney California Adventure.

The rice is relatively plain, with some herbs mixed in that don’t provide much in the way of added flavor, but it’s a welcome addition to help soak up the soup. The shrimp, sausage, and vegetables are cooked separately and then dropped in, allowing the diner to choose how much of the pan roast spice broth they want on their protein and vegetables.

Overall, we thoroughly enjoyed this, and despite its relatively smaller portion size, we will likely return for this again soon.

The seasonal cold brew with taro topper is still available as well.