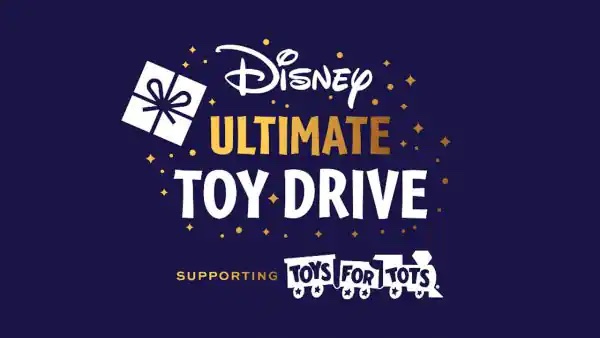 The Walt Disney Company announced that once again they are partnering with the Marine Toys for Tots Program to help bring “joy to children in need this holiday season through the Disney Ultimate Toy Drive.

Disney states that this year, toy donations can be made both online through shopDisney.com or in person with a new, unwrapped toy at a designated drop-off location. A list of these can be found at Disney.com/toydrive.

For 75 years, Disney has supported Toys for Tots to help bring toys to children in need. In fact, our relationship dates to the program’s beginnings, when Walt Disney and his studio artists personally designed the original Toys for Tots train logo we still see and use today.

The Disney Ultimate Toy Drive takes place from now through December 24, 2022, and you can donate a toy to Toys for Tots at shopDisney.com. Or, if you’d prefer to gift in person, there are plenty of donation opportunities through December 12, 2022. Bring a brand-new, unopened, unwrapped toy to the following destinations:

Throughout the holiday season, Disney will also support Toys for Tots in several ways, including by airing a public service announcement on our television networks and streaming platforms – such as ABC, Disney Channel, Disney Junior, Disney XD, Freeform, FX, Hulu, and National Geographic – to encourage viewers to participate in the Disney Ultimate Toy Drive. Content from across the company’s networks, including ESPN’s “GetUp!,” will feature Disney Ultimate Toy Drive integrations to highlight the season of giving and the importance of supporting communities in need. Disney Movie Club will also be joining in by donating over 2,000 toys to a local Toys for Tots chapter in Wisconsin. Additional activations will be announced throughout the campaign.

Today, Disney launched the heartfelt, final installation of its trilogy series “From Our Family to Yours” – an animated short that celebrates the joy of giving, featuring a song sung by Jessica Darrow, also known as Luisa Madrigal in Disney’s “Encanto.”

Every year since 2008, WDW News Today has hosted a charity drive to raise money for the Toys for Tots Foundation. To date, we have raised over $80,000 for this amazing organization with donations through our website and those made during our annual live program during the holiday season.

Our next annual Toys for Tots Marathon is at the end of this month. Stay tuned for more details coming soon.

We hope you will join us in supporting this worthwhile organization in any way you can!