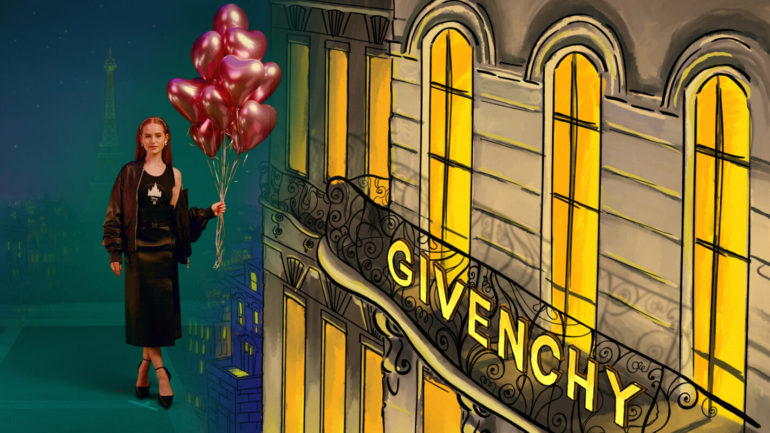 A new capsule collection featuring Oswald the Lucky Rabbit is coming soon from Givenchy in honor of The Walt Disney Company’s 100th anniversary.

The apparel collection will also mark the Year of the Rabbit.

Oswald’s “world tour” will come to life in a new mixed reality short produced in collaboration with both Walt Disney Animation Studios and art director and photographer Julian Klincewicz. The short will feature Madelaine Petsch, Amber Liu, and Alton Mason enjoying an adventure alongside Oswald. It begins at the El Capitan Theatre in Los Angeles, then moves through Shanghai, New York, Tokyo, and Paris, where Oswald will end his trip at the House of Givenchy.

The collection’s pieces for women include a blue varsity jacket with white sleeves with Givenchy and Paris lettering that accentuate placements showing Oswald the Lucky Rabbit offering a flower Ortensia. On a bright red oversized shirt and sporty short ensemble, Oswald appears jauntily astride a horse, singing, in white framed by bandana-style prints. On a jean jacket, the two characters return in graffiti-style treatments as multi-colored motifs with Givenchy lettering and an emblematic 4G logo. Oswald and Ortensia also appear on jeans decorated with musical quarter and eighth notes. T-shirts in pink, white, black, or red and black tie-dye convey messages of love and the magic of visiting Paris, while hoodies, tanks and track pants incorporate the 4G emblem stylized into a heart and Cinderella Castle in dropout white.

For men, a red varsity jacket sees Oswald riding a bronco to Los Angeles, while a blue button-down shirt frames the character amid bandana-style motifs. Denims show Oswald in his feistiest, scrappiest mode, accentuated by a lucky horseshoe in red. T-shirts with GIVENCHY lettering feature keywords and places, like “Lucky” — with Oswald tearing along on a motorcycle— and “New York City.” Sweatshirts and track ensembles, too, show him spoiling for a fight with muscles flexed or paws on hips, when he’s not fronting a “Walt Disney Studios” (Shanghai) logo.

The capsule collection will launch on December 16 in China, Singapore, and Tokyo Ikebukuro pop-up. It will be at the Miami Aventura pop-up on December 19 before going global on December 30 in stores and on givenchy.com.

Walt Disney created Oswald in 1927 for Universal Pictures and he debuted in 1927 with “Trolley Troubles.” Disney created 26 Oswald short films in 1927 and 1928, before losing creative control of the character. In 2006, CEO Bob Iger made a deal with NBCUniversal to regain Oswald. Two weeks ago, Disney released their first Oswald cartoon in 95 years.