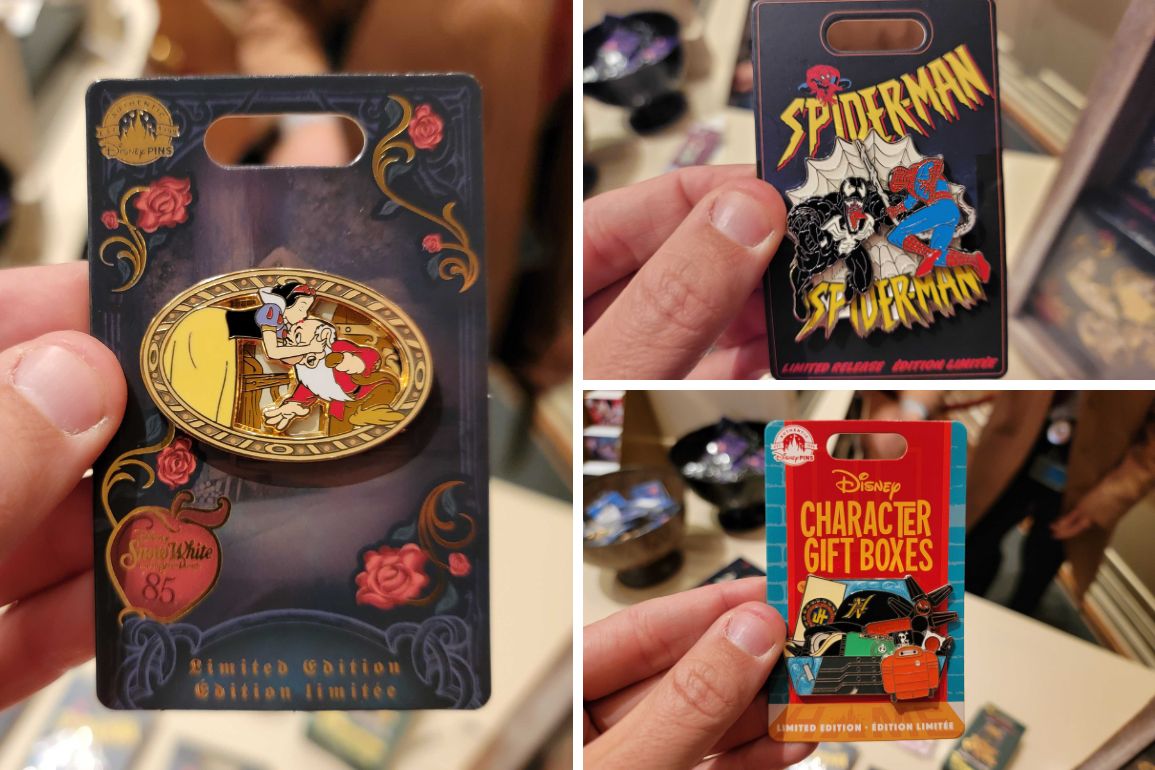 A new collection of Spider-Man and other limited edition Disney pins have been spotted this week at 20th Century Music Company in Disneyland Park.

This limited-release Spider-Man pin is part of the Marvel ’90s collection. Classic ‘Spider-Man’ wording lines the bottom as Spidey swings into action above. The pin is set on top of a white spider web. The comic-style character artwork stands out due to its enameled finish.

This limited edition pin is also a part of the Marvel ’90s collection and features Spider-Man entangled by Doc Ock. This enamel-finished pin also features the classic ‘Spider-Man’ logo on the bottom and a white spider web in the background.

This Marvel ’90s limited-release pin features comic-style Spider-Man as he tries to take down The Lizard.

Everyone’s favorite friendly neighborhood spider takes on Venom in this Spider-Man versus Venom Marvel 90s limited edition pin. This was the last of the Spider-Man Marvel 90s Limited Release Pins we were able to find at 20th Century Music this week.

This limited edition pin features the Evil Queen peering through her red-curtained castle window in celebration of the 85th anniversary of Walt Disney’s original animated masterpiece, Snow White and the Seven Dwarfs.

This limited release pin features Snow White planting a kiss on a perplexed Grumpy’s forehead. Only 4,000 of these limited-release pins exist, created for the 85th Anniversary celebration of Snow White and the Seven Dwarfs.

A limited-edition Big Hero 6 pin is the latest in the Disney Character Gift Boxes collection and features plenty of great nods to the universe of Baymax. This limited release pin is one of just 2,250 that are in circulation. A limited edition Hercules Character Gift Boxes pin was also released earlier this year.

Only 4,000 Princess Aurora Sleeping Beauty Disney Princess Tea Party Pins have been made as part of this limited release series. A Rapunzel Princess Tea Party pin was spotted in October and, in June, Jasmine and Mulan were added to the collection.

These four pins help to tell the famous tale of Snow White and the Seven Dwarfs as one of several limited-release pins crafted to celebrate the classic animated Disney picture’s 85th anniversary. The four pins feature Snow White singing at the wishing well and as she meets the Prince, the Old Hag, and the Huntsman. Only 2,050 of these four-pin Snow White sets have been released.

With so many limited edition pins to choose from at 20th Century Music Co this week, it’s hard to choose a favorite. From 90s Spider-Man and Baymax to Disney Princesses and Disney Villains, which limited-release Disney pin caught your eye?