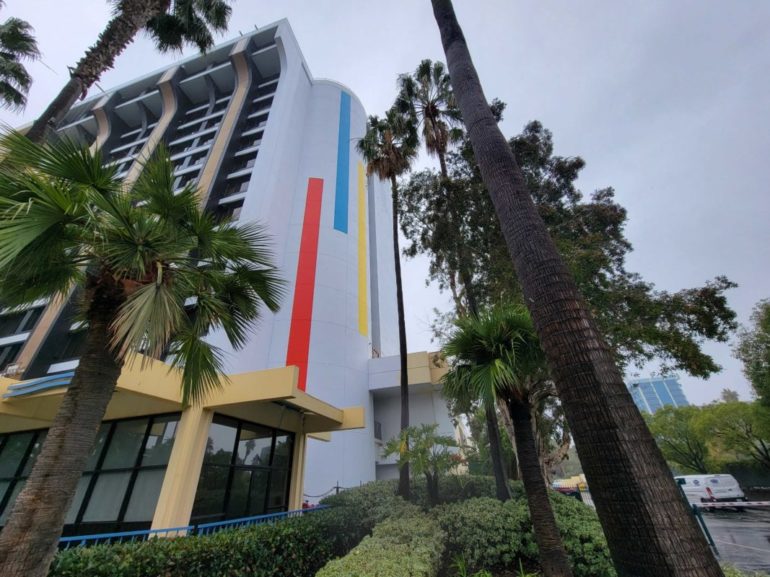 Colorful stripes have been painted on one side of Disney’s Paradise Pier Hotel at Disneyland Resort, which is being transformed into Disney’s Pixar Place Hotel.

The stripes are on a rounded tower of the building. They’re blue, yellow, and red, the same colors as Pixar’s Luxo ball.

A new welcome banner was added to a construction wall near the main entrance, which is closed for the transformation. The banner reads “Welcome to Disney’s Paradise Pier Hotel” and directs guests to the Paradise Way entrance.

Behind the banner is the porte-cochère, which has been stripped of all paneling and theming.

Concept art for Disney’s Pixar Place Hotel is on display inside the hotel.

The hotel has a surprisingly long history. The building originally opened in 1984 as The Emerald of Anaheim, owned by the massive Tokyu Group conglomerate, which owns several train lines and an extensive bus network around Tokyo as well as plenty of land holdings. This was of course during Japan’s infamous Bubble Era when massive investments were coming out of the country to showcase its wealth. Its name changed to the Pan Pacific Anaheim after some internal reorganization, then was purchased from Tokyu by Disney in 1995 and renamed the Disneyland Pacific Hotel. Finally, in October of 2000, the hotel was transformed once again into Disney’s Paradise Pier Hotel, keeping in theme with the nearby area at the then-unfinished Disney’s California Adventure park.

With the Pixar transformation, this will mark the hotel’s fourth rebranding since it opened in 1984.

Are you excited to stay at Disney’s Pixar Place Hotel? Let us know in the comments below!