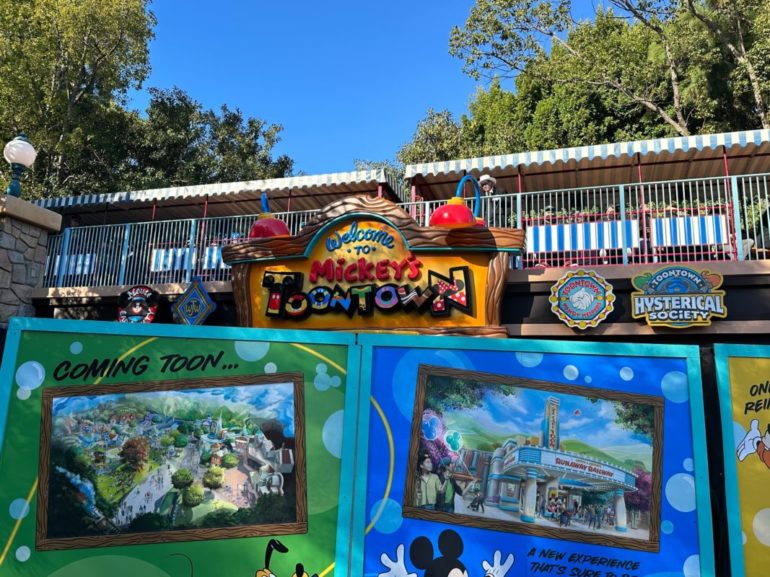 New themed signs have gone up at the entrance to Mickey’s Toontown in Disneyland, in addition to the new main sign installed a few days ago.

They are similar in size and shape to signs that were on the bridge before Mickey’s Toontown closed to be reimagined. The old signs were for the Loyal Knights of the Inkwell, Daughters of the Animated Reel, Benevolent & Protective Order of Mouse, and Optimist Intoonational.

One of the new signs is round and features a classic black Mickey Mouse ear hat. It’s for the Mouse Ear Society.

The diamond-shaped “WJW” logo is for the Junior Woodchucks of the World. Huey, Dewey, and Louie are members of this organization in various Disney media. The organization was created by cartoonist Carl Barks and introduced in the 1951 Donald Duck story “Operation St. Bernard” in Walt Disney’s Comics and Stories #125. It went on to appear in several Disney comics over the decades and in both versions of “DuckTales.” Tokyo Disneyland even has an entire area themed to this society called Camp Woodchuck.

On the other side is a sign for the Toontown Handy Helpers, featuring two white gloves holding hands. The Handy Helpers are most famously featured first on the Disney Junior series Mickey Mouse Clubhouse.

The landmark’s sign (which was “dedicated on some important day”) read, “Mickey’s Toontown has long been the exclusive playground for Toons of every ink, paint and palette. Today we welcome visitors from all walks of life to enjoy our animated world. Ride, bounce, slide, look, touch, laugh and have fun — but PLEASE PLAY SAFELY! We want you to visit us again and again.” Mickey’s Toontown Hysterical Society was listed at the bottom, with a red “M” logo featuring Mickey’s face, and their motto: “Laughter is sunshine you can hear.”

The population number under the main sign was also spinning when we visited.