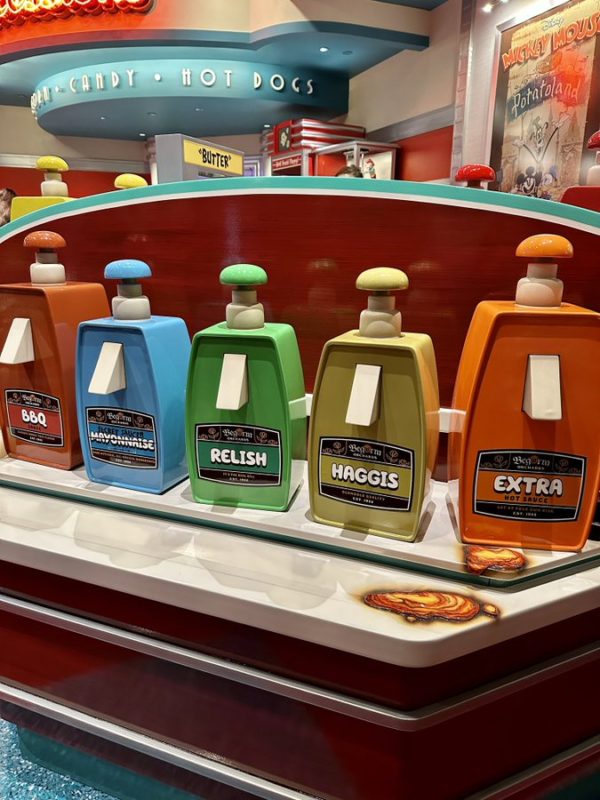 Earlier today, we got a first look inside “Mickey Through the Ears,” and now D23 has released even more details and Easter eggs on Mickey & Minnie’s Runaway Railway. The attraction opens this Friday.

Mickey & Minnie’s Runaway Railway at Disneyland Park is basically the same attraction as the one in Disney’s Hollywood Studios. D23 released a few more details on the Disneyland attraction. When you step into Toontown and head to the El CapiTOON theatre, notice that you aren’t just at any old theatre, you’re at Mickey and Minnie’s hometown movie house. This is where the attraction starts.

The attraction queue begins with “toon-ified” movie posters. Once inside the “Mickey Through the Ears” exhibit, arranged by Minnie Mouse and the Toontown Hysterical Society, take notice that it is filled with milestone moments from Mickey’s career.

Even more details are jumping out at us from the concessions stand. “McDucks Chocolate Coins” and “Powerlimes” are referencing ’90s Disney classics, and “Laugh-‘O’-Grahms” is referencing the short-lived film studio created by Walt Disney.

The Glomgold Haggis, anyone? Even the condiments section is bursting with easter eggs.

The popcorn is in shapes of Mickey, Minnie, and Donald Duck. The amount owed on the cash register nods to the year of Mickey Mouse’s debut.

Once aboard the Runnamuck Railroad, you’ll encounter all our old friends and Chuuby, the singing bird. The attraction is filled with Easter eggs. The look of Mickey and Minnie’s Runaway Railway is made to look like a hand-drawn illustration. Mickey Mouse executive producer, Paul Rudish, and art director, Joseph Holt, were consulted by Disney Imagineers to make sure that the drawings were done accurately.

In the stampede scene, you can see a cactus made to look like it was floating in midair. This is actually achieved by “extra floating lines” to give the cactus the appearance that it is indeed floating.

“Nothing Can Stop Us Now” is the original song to the attraction, and it was written by Christopher Willis, with help from his wife, Elyse Willis. You can also hear several sound effects created by Disney Legend Jimmy Macdonald aboard the Runnamuck Railroad. Imagineers created some new sound effects using Macdonald’s original equipment. Keep an ear out for Engineer Goofy’s train whistle because the tri-tone whistle from Mickey Mouse’s 1928 debut, “Steamboat Willie,” was used to record it.

You can find references from Disney Legends, landmarks, and milestones throughout the attraction. All these Easter eggs celebrate Disney’s and Mickey’s heritage. Oswald the Lucky Rabbit has his own Easter egg on a newspaper that’s headline reads “Oswald Wins!.” Disney Legend Ub Iwerks gets an Easter egg in the form of “Iwerks and Uwerks Waterworks water treatment plant.” Ub Iwerks sketched Mickey for the first time. Pay close attention to the numbers found throughout the attraction. 1401 pays tribute to Walt Disney’s Imagineering’s Glendale, California headquarters, 1901 for Walt Disney’s birth year, and 1928 for Mickey Mouse’s birth year.

Are you excited to find more Easter eggs in the exhibit and attraction? Let us know in the comments.