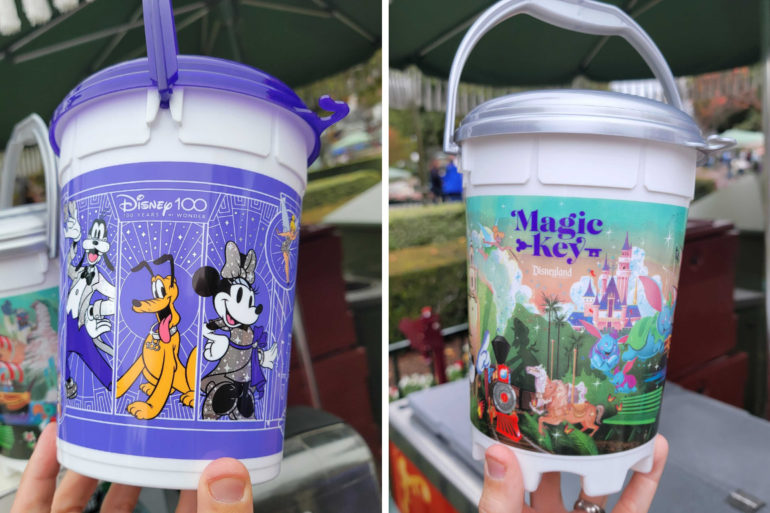 The Disney 100th anniversary celebrations kick off at Disneyland Resort on January 27, but the merchandise is starting to arrive already. The new Magic Key Holder exclusive popcorn bucket and a standard bucket are now available.

The popcorn bucket is the standard white with a purple wrap. It features art deco-style framing around character portraits with the Disney100 “100 Years of Wonder” logo.

Tinker Bell hovers above the castle. A Disney100 shield logo is at the base of the castle.

Carthay Circle is on the other side, with a round Disney100 logo at the bottom. Chip and Dale are on either side, presenting the building.

It comes with a purple lid.

The bucket is white with exclusive artwork which features the flowers from “Flowers and Trees,” a 1932 Silly Symphony cartoon, surrounding a cartoonish Walt Disney and Mickey Mouse, seemingly paying tribute to the Storytellers statue in Disney California Adventure. Next to them is the famous directional signage seen on the Disney lot in Burbank.

Around the side are the Carthay Circle Theater, the Disneyland Railroad, and Tinker Bell.

Below the “Magic Key” logo are some King Arthur Carrousel horses. At the very center, we have Sleeping Beauty Castle, some Dumbo the Flying Elephant elephants, and a bench from the park.

Finally on the far right is a Hitchhiking Ghost, the “it’s a small world” facade, Grizzly Peak, Space Mountain, Pixar Pal-A-Round, and Chuuby from the upcoming Mickey & Minnie’s Runaway Railway.

Will you be adding a new Disney100 popcorn bucket to your collection? Let us know in the comments.