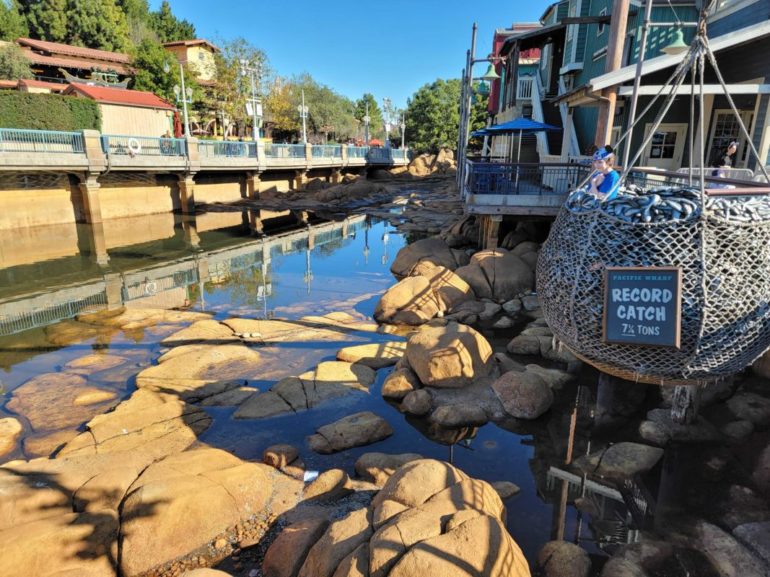 As construction for San Fransokyo gets underway at Disney California Adventure, water levels have been diminished considerably from the lagoon surrounding the soon-to-be-former Pacific Wharf.

As we announced last week, construction has officially begun on the transformation of the Pacific Wharf. The small mini-land of restaurants at Disney California Adventure, which was themed to San Francisco, will be reimagined to San Fransokyo from “Big Hero 6.” As part of those construction efforts, water has been drained surrounding the area.

Given the lagoon’s connection with Grizzly River Run, the water could only be drained when the attraction is closed. The Pacific Wharf lagoon typically serves as an overflow, particularly when Grizzly River Run is drained for maintenance. The ride’s regularly scheduled annual refurbishment happens to be underway at the same time as the San Fransokyo construction, allowing for crews to handle both projects simultaneously. The bridge connecting Pacific Wharf and Paradise Gardens Park offers the perfect vantage point for seeing just how low water levels have reached.

Right now, the area is largely known as a food court for Disney California Adventure. Options in the land include Ghirardelli Soda Fountain and Chocolate Shop, Lucky Fortune Cookery, Pacific Wharf Cafe, Rita’s Baja Blenders, Cocina Cucamonga Mexican Grill, and Pacific Wharf Distribution Co. When the construction is complete, the new version of the land will include a Baymax meet-and-greet, food, and more.

As of now, it appears the draining of the lagoon is the only currently visible step for the reimagining of the Pacific Wharf as San Fransokyo. Are you excited to see this area transform into San Fransokyo? Let us know in the comments below!