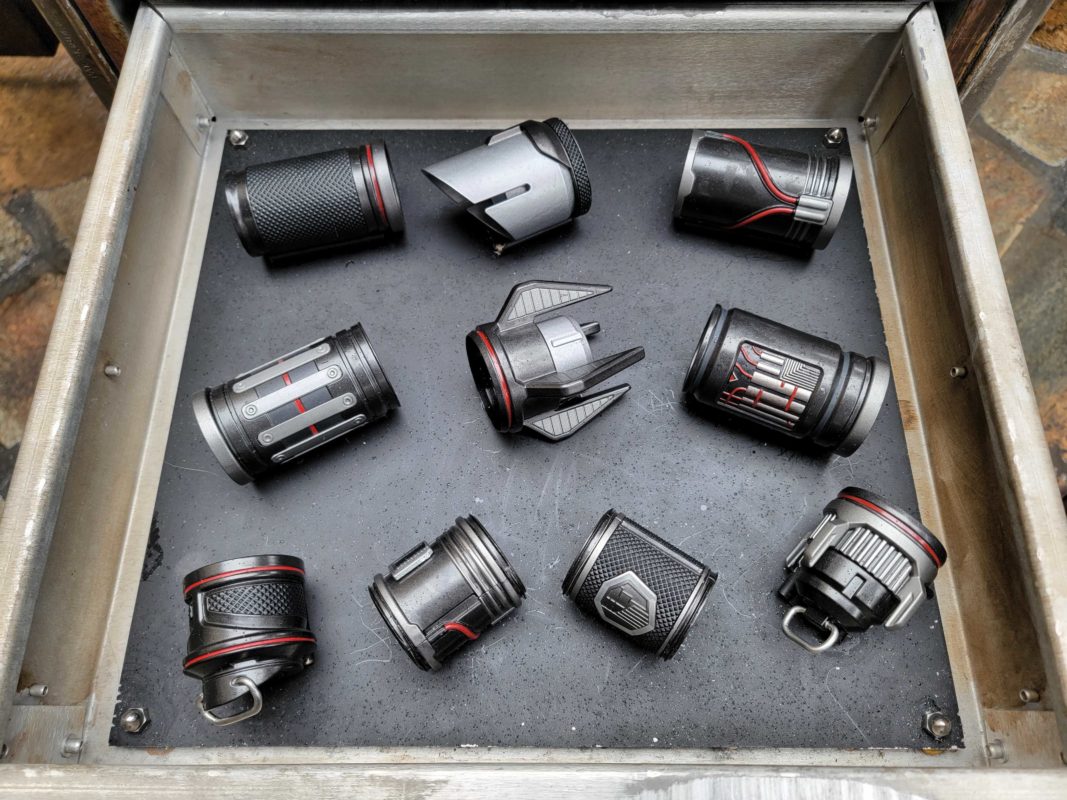 Bright suns! As previously announced at Star Wars Celebration last year, the four themed “scrap metal” collections at Savi’s Handbuilt Lightsabers have been updated with all new parts, with the old options now retired. So we headed down to Savi’s ourselves to take a look at these new pieces!

Savi’s Handbuilt Lightsabers is the custom Lightsaber building experience in Star Wars: Galaxy’s Edge at Disneyland Park (and also at Disney’s Hollywood Studios in Florida). Guests must pre-pay $249.99 plus tax for the experience, which includes a lightsaber (a hilt, two sleeves, one emitter, one pommel cap, one set of activation plates and switches, and a 31″ blade), a cloisonné pin, and a lightsaber carrying case.

The in-universe story is that the Gatherers, who possess forbidden knowledge of the Jedi Order, are operating out of Savi & Son Salvage. On the surface, Savi sells scrap metals from old ships and devices. The Gatherers use his salvage shop as a cover to help Force sensitive beings craft their own lightsabers.

When you arrive at Savi’s, the Gatherers will show you the various collections of “scrap metal” they have to offer, which are the four themes: Peace and Justice, Power & Control, Elemental Nature, and Protection & Defense. Each theme has multiple options for most of the lightsaber parts, so once you are inside the workshop, the Gatherers will help you select the specific designs you want for your hilt.

For a close-up look at the old styles for comparison, see our detailed photos here. The new styles are below.

The Peace & Justice theme embodies salvaged scraps from fallen Jedi temples and crashed starships in these Republic-era designs to honor the galaxy’s former guardians. These parts will have the most traditional Jedi lightsaber design of the four collections.

The biggest change here is the removal of the angled emitter. Both emitter options in the new set are flat-ended. There’s still a pommel cap with a ring for attaching it to your belt if you so choose, and a new conical pommel cap as well. The sleeves have more solid black overall but no longer have an all-black option. The accents are more orange than golden.

Another change is that each collection now offers a switch piece that bears the mark of the theme. The switch on the bottom row, second from the left in the above photo has a round yellow “peace & justice” symbol.

Originally forged by dark side warriors, this style features rumored remnants from the Sith homeworld and abandoned temples. Characterized by sharp and strong forms, these pieces showcase the brutality and relentlessness of the Sith’s insatiable desire for power and control.

Like the old set, the pieces are primarily black and silver with red accents not unlike exposed wiring. The new collection has more predominantly black pieces than the previous, which had several silver options. This collection no longer offers a conical pommel cap, but both choices have loops for easy attachment.

The pronged emitter has sharper angles than its predecessor and more silver details. The other emitter used to be flat ended, but now has an angled opening.

As we have been told, the Force is an energy field created by all living things; it surrounds us, penetrates us and binds the galaxy together. These lightsaber pieces are born of that same Force. They are as unique as the user and as the elements of nature.

This collection is the most changed from the previous versions. While silver remains a main color in the designs, the pieces have all seen major updates. The “leather” wrapped sleeve is lighter in color and has a band of bone around one end. The green one at the top right is supposed to resemble Dewback leather, while the other two sleeves are now primarily bone and leather rather than silver and wood.

The emitters are both longer and cylindrical, eliminating the angled and capped designs from the prior collection. However, the most obvious change is the pommel caps. The Rancor tooth is no longer an option, replaced instead by what appears to be Bantha bone. The other pommel cap now has a wooden triangular end rather than a flat end with a ring.

Cultivated from a time forgotten, these earliest lightsaber pieces contain designs and inscriptions that are shrouded in mystery. Believed to be created for protection and defense, conferring anonymity and symbolizing emotional detachment, a lightsaber made from these pieces reconnects the user with the most ancient wellspring of the Force.

The icons on the switches aren’t the Protection and Defense emblem but rather the symbol seen in the Jedi Temple on Coruscant. They use the same core color scheme — silver as the primary color with copper and golden accents.

Two of the sleeve options have “Force Wielder” on them, written in ur-Kittât — a Star Wars language often referred to as a Sith language, but which is also known as the Old Tongue and used by Force users of all kinds.

The emitters are both larger and feature cutout designs rather than the small flat versions prior.

To see a full video of the Savi’s Handbuilt Lightsaber experience, check out our video below from the opening of Galaxy’s Edge. It features the old style of hilt parts but the experience has remained the same. The video contains spoilers.

Which updated theme for the Savi’s Handbuilt Lightsabers do you prefer? Let us know in the comments!