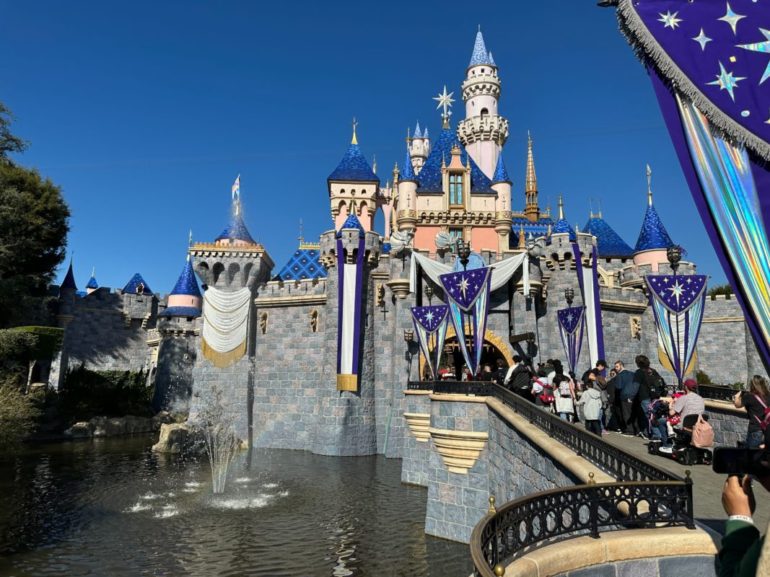 As we announced earlier this month, new fountains have been installed in the moat surrounding Sleeping Beauty Castle in preparation for the Disney100 Celebration at Disneyland. The fountains have now been turned on ahead of the Walt Disney Company’s centennial celebration beginning this Friday.

Just yesterday, much of the bunting and banners appeared to be fully installed on the facade of Sleeping Beauty Castle ahead of the Disney 100 Years of Wonder celebration. To complete the look for the 100th Anniversary celebration of The Walt Disney Company, fountains have been turned on in the moat surrounding the castle.

On either side of the moat, fountains stream from up to 18 nozzles, nearly reaching the height of guests on the bridge above.

The new fountains are meant to complement Disney’s 100 Years of Wonder theming for the centennial celebration. Sleeping Beauty Castle is adorned with purple and platinum banners and bunting, featuring a cabochon depicting the three Good Fairies. The castle will be further illuminated with shimmering pixie dust. A wishing star will illuminate from the tower above.

The Walt Disney Company’s 100th-anniversary celebration will commence on January 27th at Disneyland Resort in Anaheim, California. Guests will be able to mark this historic occasion by experiencing the grand opening of the new Mickey & Minnie’s Runaway Railway attraction, as well as two all-new nighttime spectaculars: World of Color – One at Disney California Adventure Park and Wondrous Journeys at Disneyland Park.

The celebration will also feature special entertainment, food, beverage, and merchandise offerings, making it a not-to-be-missed event. Disneyland has announced a special live stream to help kick off the Disney100 celebration on Friday, January 27, beginning at 5 p.m. ET/2 p.m. PT.

Are you excited about all the upcoming Disney100 activities this year? Let us know in the comments below.

To see more of the new Disney 100 Years of Wonder enhancements, check out the following articles: