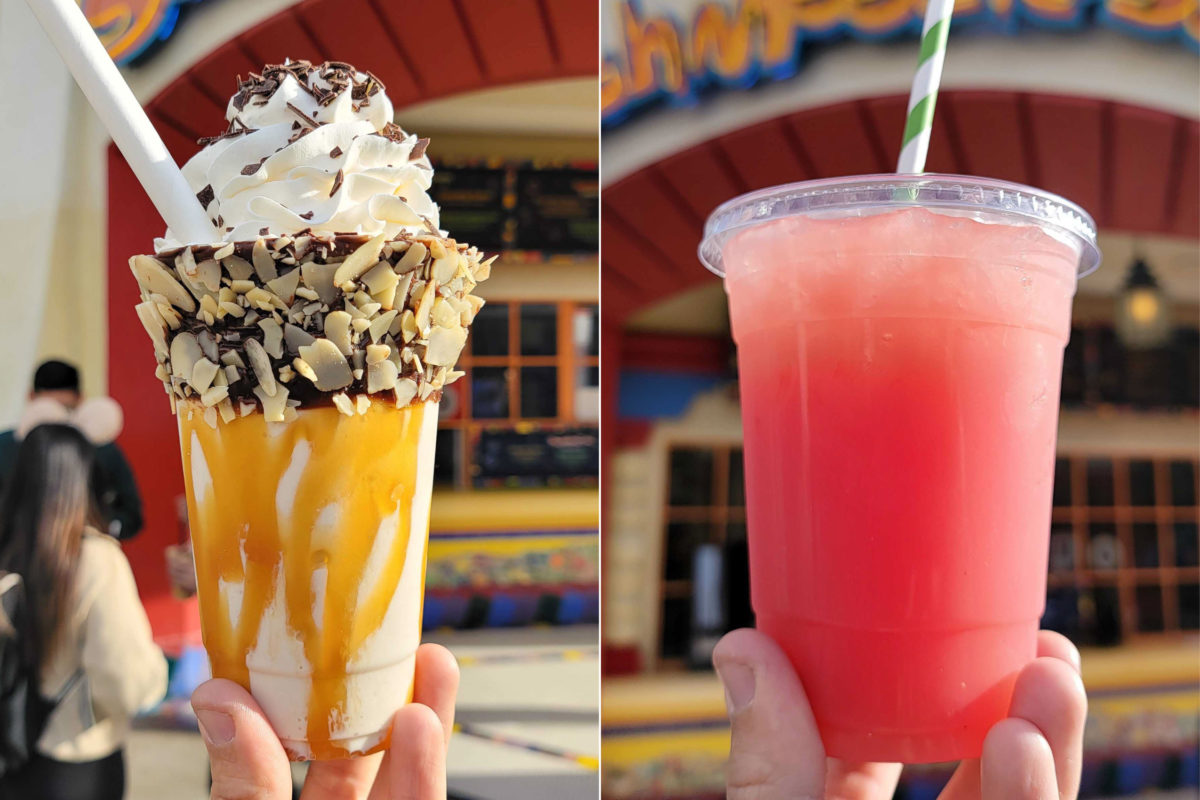 Feel like a sweet treat as you stroll through Hollywood Land at Disney California Adventure? Well there’s no better place along the way than Schmoozies! As the seasons turn, they have two intriguing new offerings we just had to try — the Banana Shake and the Watermelon Lemonade — so join us as we give these a sip and see how they fare.

Shakes at Schmoozies always take on this over-the-top look, with a layer of chocolate and almonds this time covering the top of the cup. For traditional favorites like the Churro Shake or the previous seasonal Blood Orange Shake, a layer of sugar covered the top.

The flavor on this is simple yet pleasant, and we just wish there was more of it. It’s a very subtle banana flavor, being lost in the shuffle of the ice cream. The caramel sauce and chocolate shavings are wholly overtaken by it as well. If the banana flavor were stronger, it would probably work well with the caramel and the chocolate.

Banana, as a fruit, isn’t possessed of a bold flavor and therefore when mixing it in with the ice cream, it is understandably muted. But the banana smoothie over at Pym Test Kitchen is more banana-forward, and we wish this was more like that one. That being said, if you’re in the mood for ice cream rather than a smoothie, this is a nice alternative.

This is a fairly straightforward classic. It’s neither too sweet nor too sour, but right where it needs to be. The watermelon tastes fresh and fruity, more like real fruit watermelon than a syrup. We’ve been noticing across the Disneyland Resort that many of these drinks, which at one time would have been just syrup in soda, have transitioned to more real fruit and fresh flavors. This one is no exception, as the watermelon is so bright and vibrant in flavor.

We don’t know that this would necessarily pair well with a meal, but it should be enjoyed on its own on a warm spring or even summer afternoon.

Both of these are now available as the latest seasonal offerings at Schmoozies in Disney California Adventure, and they’re both well worth your time and money. But what do you think? Be sure to let us know in the comments below!