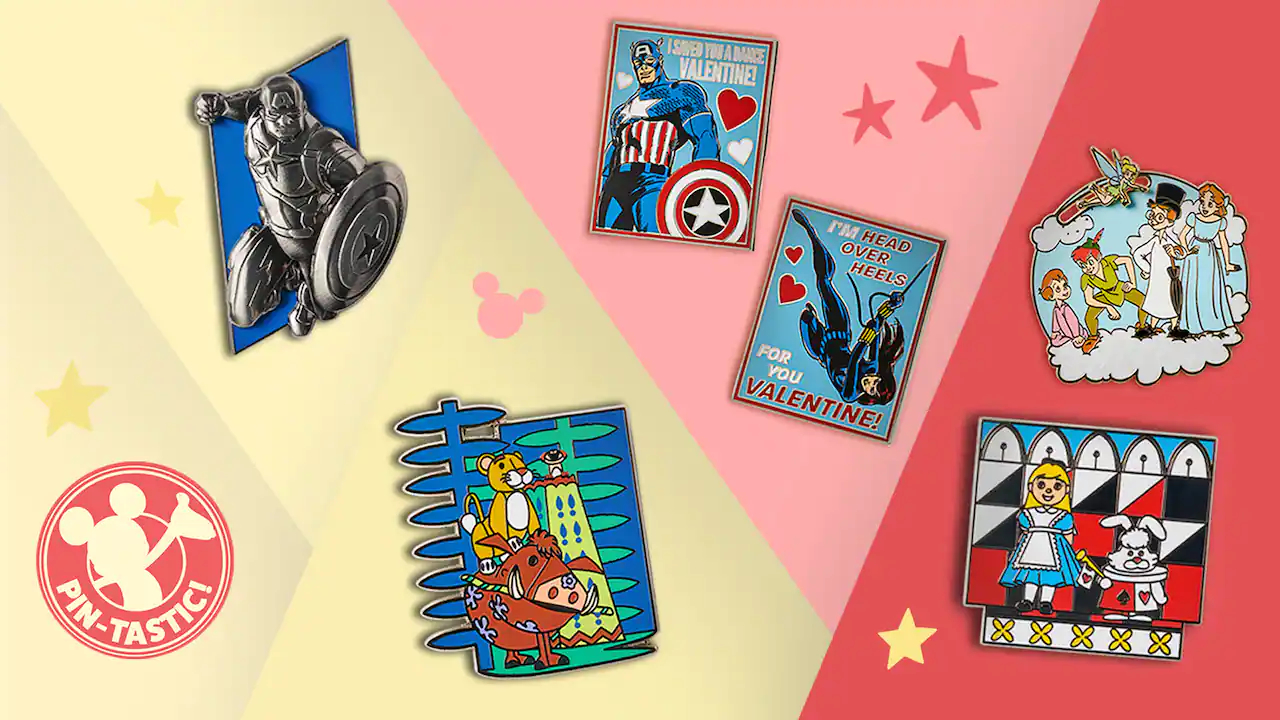 Pin collectors rejoice! Starting today, shopDisney has unveiled a new ‘Pin-tastic’ Tuesday Events. Every Tuesday at 7:00 a.m. PT/10:00 a.m. ET starting today, a new selection of collectible pins will be released on shopDisney. These pins can include limited edition items, blind packs, sets, exclusives, and more. However, the style of the pins will remain a secret until their release.

Today’s selection of pins include:

This Captain America, Sentinel of Liberty pin is a limited edition of 1,850. Captain America is in a metallic finish and three-dimensional bas-relief sculpt. It is a pin-on-pin design with an electric blue fill color base. It features a Disney Trading 2023 backstamp and comes on a Marvel Pins card. This pin was inspired by Marvel’s “Captain America: The First Avenger” (2011) and measures 2” H x 1 1/4” W.

What’s better than giving someone a paper Valentine card? Giving them a Marvel’s Heroes and Heroines Valentine, of course. Each blind pack contains two randomly selected pins from a possibility of 11 different designs depicting comic book favorites in love. Since these are mystery boxes, you won’t know which pins you have until you open the box.

Each one is made from enameled cloisonné with a nickel finish. The back is stamped with Disney Pin Trading 2023. backstamp and each one measures 1 3/4” H x 1 1/2” W.

These pins are a must-have for fans of Disneyland’s “it’s a small world” attraction. This mystery pin collection includes two randomly selected pins from a possibility of eight different designs depicting Disney Animation favorites. Each pin is finished in nickel and the designs are made from enameled cloisonné.

Each pin measures up to 1 1/2” H or W and has the Disney Pin Trading 2023 backstamp. They also come with Mickey icon pin backs.

In 2008, 29 Disney Animation Characters were added to Disneyland’s Disney it’s a small world attraction. These changes were later also made at Tokyo Disneyland in 2018.

Floating on a cloud are Peter Pan, Michael, Wendy, and John Darling. Flying above them – on a slider – is Tinker Bell.

The characters are finished in an enameled cloisonné. As with all the pins, the Peter Pan limited edition pin has a nickel finish, the Disney Pin Trading 2023 backstamp, and includes Mickey Mouse icon pin backs. It measures 1 3/4” H & W.

The pin is attached to a decorative card that has the skyline of London in midnight blue.

That’s all for this week, but there’s more to come every Tuesday throughout 2023! Are you excited about “Pintastic Tuesdays”? Let us know in the comments below.