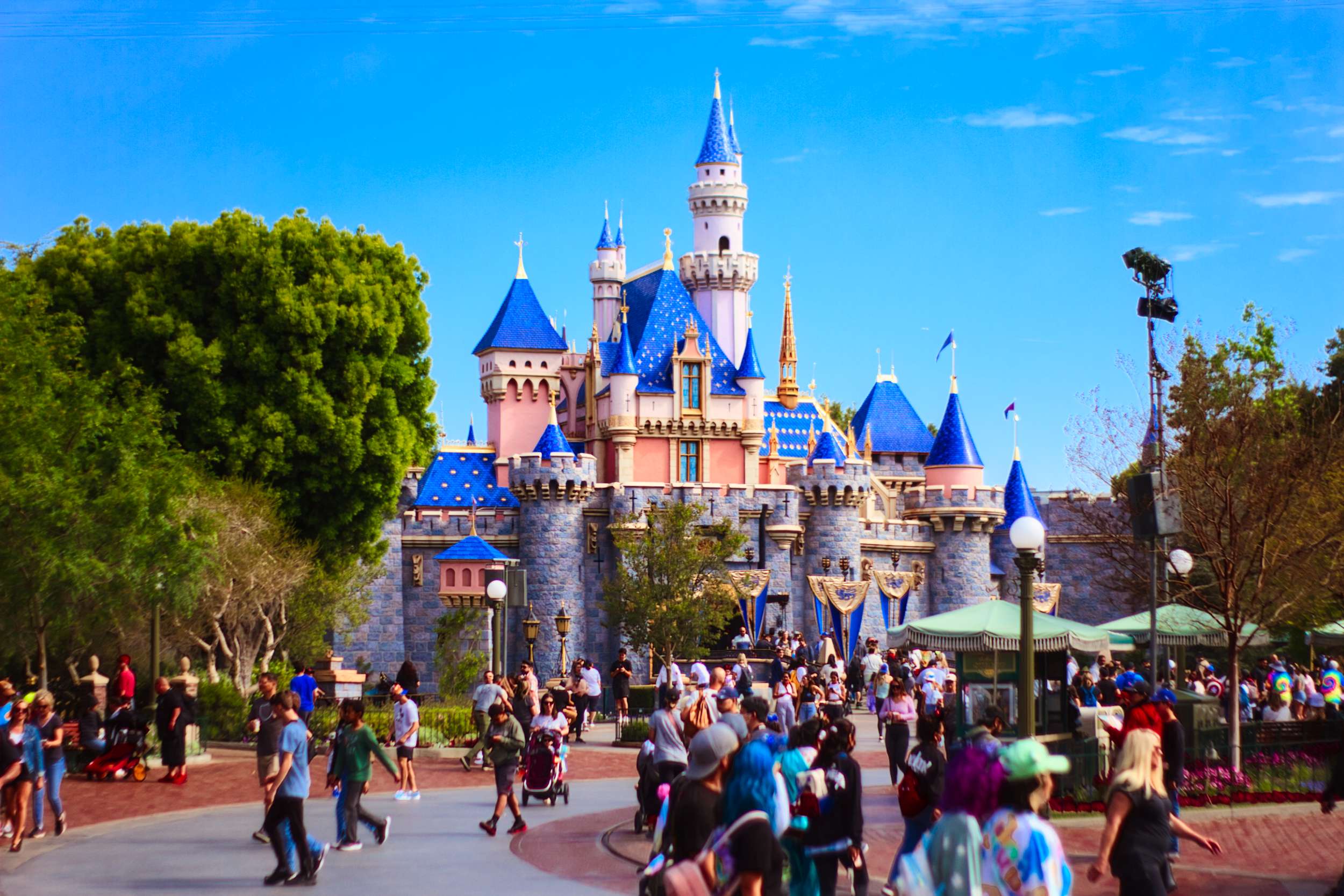 At the security entrance in the Mickey and Friends Parking Structure, the sign warns us that it’s going to be a busy day today.

But despite the crowds, we had a beautiful day of sunny skies, moderate temperatures, and vibrant colors.

We stopped off for a cup of joe in Market House, and we noticed these Babybel cheese snacks that are themed to Walt Disney World’s 50th anniversary. Each cheese wheel comes in a wrapper depicting a character, and it’s a grab bag of who is featured from pack-to-pack.

Speaking of some favorite snacks, we found this adorable Mickey pretzel Loungefly bag and the accompanying Spirit Jersey here at the park. It’s scented, so you can carry a tantalizing smell with you all day. You can read all about it right here.

Nearby at 20th Century Music Co., we found a smattering of new pins, including this one featuring Merida, the newest princess in the Designer Collection. You can see all the pins right here.

We also spotted the Merida doll herself in Disneyana. This has to be one of our favorite dresses so far.

The treehouse formerly known as Tarzan’s is still under wraps as the refurbishment and retheme continue. Take a look at some more photos right here.

New Orleans Square is a bevy of construction and refurbishment activity right now, and the land is covered in construction walls.

Fantasmic! equipment refurbishments are underway along the Rivers of America.

The walls around the entrance to Pirates of the Caribbean have recently been expanded as the refurbishment continues.

From the bridge over the entrance to the attraction, we can see some of the work that is going on inside the walls.

Large swatches of pavement have been removed as grading and widening of the paths is underway.

Elsewhere in New Orleans Square, some of the walls that were erected last month have come down, revealing a wider pathway.

The Haunted Mansion has a new spring-themed wreath hanging over the entrance. Always nice to see some fresh flowers on the mausoleum mansion.

The Fantasyland Theatre was doing some work today, with an LED screen hanging down and floral arrangements around the stage.

No word on what this was for, but it clearly isn’t ready for showtime just yet.

And while we were checking on the theatre, who should walk up but the Big Cheese himself.

Mickey and all the characters can now greet guests with a hug and get close again. We stopped in the other day to give some hugs here at Disneyland and over at Disney California Adventure as well, and you can read all about our interactions in the links above.

But we also couldn’t resist the opportunity for a few nice portrait shots of Mickey on his own.

With the return of personal character greetings came the lines for characters. We saw Mickey again later in the day on Main Street, U.S.A., and he had quite the line just to say hello.

And one stopover on Batuu before we leave the park. Today, we noticed that both Ronto Roasters and Docking Bay 7 were closed due to a ‘maintenance issue.’ You can read all about it right here.

As the resort prepares for Earth Day this Friday, little touches can be found all over the place. Here in Downtown Disney, the construction walls have received some new art pieces of whales.

There are also posters for some new National Geographic documentaries coming to Disney+ for Earth Day.

And National Geographic is also represented in the park with this photo op, which places guests on the iconic yellow-bordered cover of the magazine in front of a nature background at Grizzly Peak.

Spring is in full swing, and we noticed that the cactus flowers are starting to bloom in Radiator Springs.

A late addition to the Food and Wine Festival merchandise collection. This salt shaker is modeled after a park trash can, even though this particular design won’t be found on any trash cans in the park.

Chip and Dale are on one side, with Mickey and Pluto opposite and the festival logo on the remaining two sides.

With the festival coming to an end soon, we had to revisit one of our favorites before it’s gone. Take a look at our review of the Next Level Crackers and Cheese from the Nuts About Cheese booth.

World of Color is set to return this Friday, and work is still being done on the fountains, which are above water almost every time we check.

This lagoon sure is desolate now that our favorite Christmas trees have been taken out. *Sigh*

And just like that, another one goes down. Bullseye’s Stallion Stampede is closed instead. Let’s hope it’s not for as long as Wall-E was closed.