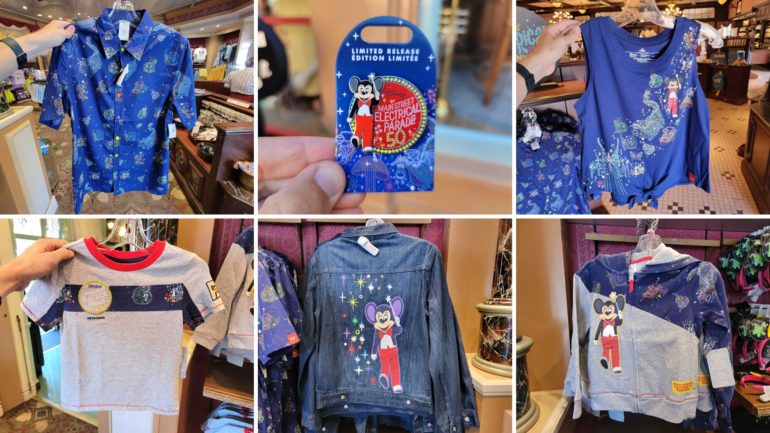 More merchandise celebrating 50 years of the “Main Street Electrical Parade” has arrived at Disneyland Resort. We found a limited release pin in 20th Century Music Co. and more merch in Disney Showcase and the Emporium.

The pin features Mickey leading the parade with his star-topped baton. Behind him is the red drum float reading “Disney Main Street Electrical Parade 50,” with gold dots around the edge and stars representing lights.

This hoodie has a diagonal split, so the bottom and right sleeve are heather grey.

The top and left sleeve are dark blue and patterned with dotted images of “Main Street Electrical Parade” floats. Mickey, with his star-topped baton, is on the opposite side of the zipper.

A yellow “Main Street Electrical Parade” patch is at the bottom. The stitching on the edges is red.

This matching youth tee is mostly heather grey with a blue stripe across the chest. The floats, and the “Main Street Electrical Parade 50” drum logo are on the stripes.

The neck and stitching are red.

Mickey is featured on one sleeve.

This short-sleeved blue button-up features the same pattern featured on the blue sections of the youth apparel.

A red tag for the parade’s 50th anniversary is on the left sleeve.

This denim jacket has colorful stars painted on triangular panels on the front.

Mickey, with another cluster of stars, is on the back of the jacket. All of the apparel above was in Disney Showcase.

This blue tank has the floats and Mickey in a diagonal line across the front. It ties at the bottom.

The back is blank.

We found this tank in the Emporium, along with the magnets below.

There are eight magnets in this set.

Most of the magnets resemble different floats, though there is one of Mickey.

They have transparent backgrounds so stars seem to float around the floats.

There is one magnet of the new finale float inspired by “it’s a small world” and various classic Disney stories.

Check out this new “Main Street Electrical Parade” t-shirt too.